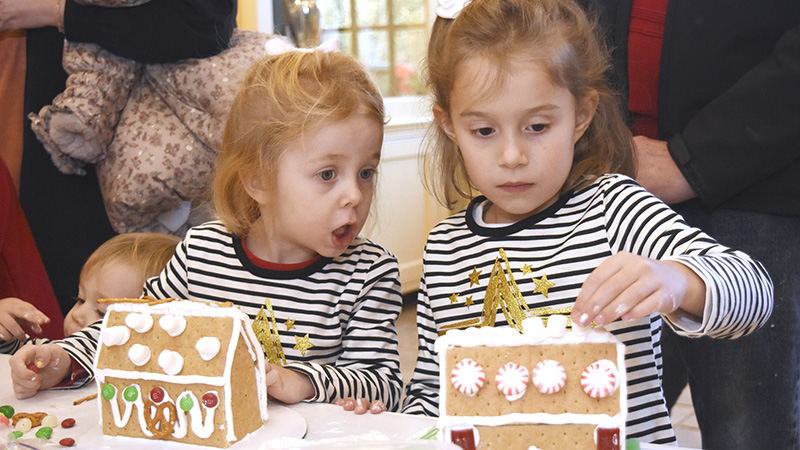 It was hard to tell who was having more fun Saturday at the annual Children’s Christmas Celebration at Hills & Dates Estate — the children making gingerbread houses or parents, who were taking photos and smiling about the different designs.

“It’s precious and I love it,” said mom, Stephen Varner, who was watching her 7-year-old son, Spencer put together his house. “This is his second or third gingerbread house of the season, so he’s a pro.”

This was the first time Stephanie had ever brought her son to the Hills & Dales event, but she’d always wanted to. Now that she’s seen it firsthand, she hopes it becomes a new holiday tradition.

“We’re really grateful that the Callaway Foundation does this, and we really appreciate it,” Varner said. “We look forward to coming back next year.”

A total of 347 gingerbread houses were put together Saturday by children of all ages. The three-hour celebration was supposed to begin at 10 a.m., but there were people lining up in the cold well before that so organizers opened the doors early.

“We’ve run out [of gingerbread houses] every year. We’ve always told people first come, first served. Sometimes we’ll run out, but we hope not to run out today,” said Joanna Baxter, who oversees the event and has worked as a docent at Hills & Dales for 10 years.

Baxter said they provided about 75 more gingerbread houses this year than in 2016. Plans for the free event begin in September because of how much organization it takes to put it together.  Peppermint, liquorish and other candies were provided and every gingerbread that left was unique. Frosting was in high demand, and plenty of it was provided.

“We try to supply various candies, as best we can,” Baxter said. “There’s just so much you can put down on a table in those little tubs, but what they do with it is just amazing.”

Volunteers from the LaGrange High School Service Club helped keep the children on task and provided the materials they needed to build their houses.

Santa Claus also made an appearance and took pictures with children.

Many families make the annual day a part of their holiday tradition. Tiffany Allen said her son Hayes, 7, has been making gingerbread houses at Hills & Dales for five years.

“He looks forward to it just as much as I do. He loves to make a gingerbread house and we have a place we put it every year,” Allen said. “He doesn’t touch it and the last day when his elf leaves to go home, he always leaves from the gingerbread house.”

Baxter said once again the event was a success.

“We really have a cross-section of the community that comes,” Baxter said. “Everybody is here, and that’s what we want. We want people to understand that this is for the community, and that is what the foundation is all about.”