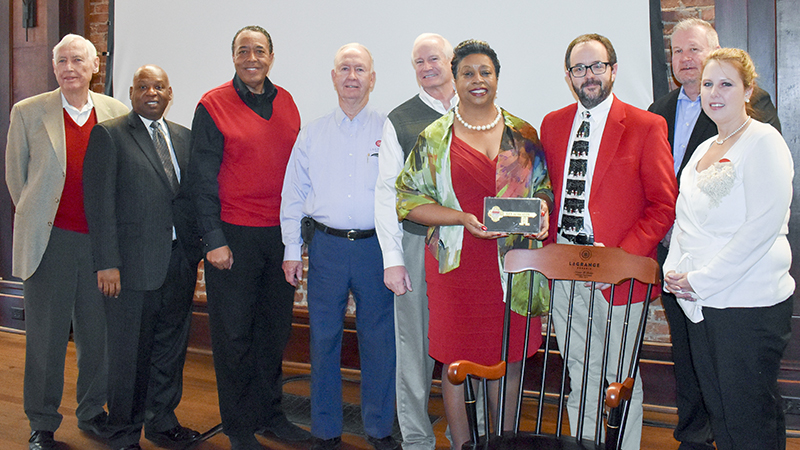 On Thursday, the LaGrange City Council will hold its last meeting of the year, and the final meeting before waving farewell to one of the most outspoken female voices in the community, Council member Norma Tucker.

“It’s been a beautiful experience, a life changing experience, and I can’t even imagine all the opportunities that I’ve been blessed with simply because I was on the LaGrange City Council at this time,” Tucker said

According to Tucker, her experience as an active service member in the military helped prepare her to serve on the city council, though other local elected officials supported her along the way.

“(Kay Duran’s) encouragement over the years was great,” Tucker said. “To have people like Judge (Jeannette) Little, (Troup County Solicitor General) Markette Baker, to have other women in the community and in elected leadership roles to send you notes of encouragement… I think it speaks to the system of service in our community.”

When Tucker made the decision not to run for re-election earlier this year, she said that she hoped another strong female candidate would step forward. None did, and in January the council will once again be composed entirely of men, like it was when Tucker first joined. However, her time on the council has undoubtedly had an impact on the city.

“I think she, as the only woman on the council, she has added a very important perspective, but she has also been a very tireless advocate for the City of LaGrange, and I appreciate her service,” Mayor Jim Thornton said.

In her time on city council, Tucker has earned the respect of those who have served with her with her passionate advocacy for the people of her district as well as the city as a whole.

“We still have a long way to go with regards to the changes specifically to the district that I represent with district 2,” Tucker said. “One of my frustrations has been watching growth and development takes place all over the city, and it gets right to the edge — even as downtown has expanded — but to see our hopes of seeing new growth and new positive growth take place say on Hamilton Road and all throughout the district, that kind of stuff.”

Tucker was excited about projects like the Calumet beautification efforts, but hopes to see even more growth in the district in the future.

“Since she has been on the council, I have the utmost respect for her,” Council member Willie Edmondson said. “She has become one of the most outspoken women in LaGrange and Troup County. She represents us well.”

She was also commended on the thought and perspective that she has brought to council meetings over the years.

Tucker’s service to the city began during the economic downturn that shook the country, but she says that she has been fortunate to see LaGrange pass swiftly through that time of financial uncertainty and grow.

“In 2006, when the announcement came that Kia was coming, and ultimately that October of my first year in office, we had the groundbreaking ceremony for Kia,” Tucker said. “Then in 2008, we had thousands of new jobs being created during a time when everybody else was struggling, and so just watching things get better over the years. The community has continued to grow with people coming from all over the world with people bringing their influences into our community and just watching all of that take place and just make LaGrange a better community.”

Tucker expressed high hopes that the people of LaGrange, especially the women and the people of district 2, will continue to grow and succeed in the future.

“One of my most recent school visits was with a group of young women (called) Girls in Pearls,” Tucker said. “Seeing those young women, none of them cared or maybe understood what the council or mayor does, but just to be able to sit there and look at them and speak to them and hear some of their concerns or some of the things that they’re dealing with on a daily basis, that was good. I hope somewhere in my message I was able to encourage them whether they become elected leaders in the future or whether they are attorneys or lawyers or moms.”

Once she has completed her time on the city council, Tucker plans to continue her work connecting mothers and babies with the resources they need at WellStar West Georgia, but she also plans to take the opportunity to relax, and enjoy time with her family, including her son who was sworn into the LaGrange Police Department on Monday.

“It really sinks in at a certain age, you know what, you better get to doing all those things that you’ve been wanting to do and live this life because tomorrow is not promised,” Tucker said.

She expressed her gratitude to the people of district 2 who voted for her and worked with her over her three terms in office.

“It has been a good 12 years for me — even when it was difficult or should have been difficult — (former City Manager) Tom Hall and (City Manager) Meg Kelsey and the rest of our staff and team and the mayor and council always worked together to keep things moving forward,” Tucker said. “… I’ve been around some of the best, and I’ve had the opportunity to learn from the best both in the district and within the city.”

In January, Nathan Gaskin will take Tuckers seat on the city council. The LaGrange City Council meets on the second and fourth Tuesday of every month at 208 Ridley Avenue at 5:30 p.m., though the final meeting of the year has been rescheduled for this Thursday at 5:30 p.m. due to the holiday.

Look for a feature on Council member Nick Woodson later this week.