HAMILTON — According to the Harris County Sheriff’s Office, three Harris County Schools went into soft lockdown on Wednesday morning after a Troup County man threatened a school over social media. 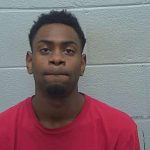 Takelin Maddox, 20, was arrested around 1 p.m. on Wednesday and charged with one count of disrupting public schools and one count of terroristic threats. According to the Harris County Sheriff’s Office, the threat against Harris County Performance Learning Center first came to its attention around 10 a.m.

“We were notified by the school system that there had been a threat of violence had been relayed via Facebook,” said Chief Deputy Col. Chris Walden. “It stemmed from a boyfriend being upset with a girlfriend. We were able to identify the male party that posted those threats. We located him, and he is now in custody.”

The Harris County Performance Learning Center, Harris County Carver Middle School and Park Elementary School all declared soft lock downs following the threat as a precaution. Both the elementary and middle schools are within a mile of HCPLC. No one was harmed during the incident, and the lockdown was lifted following Maddox’s arrest.