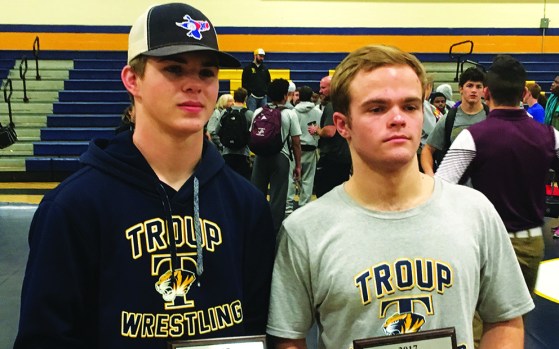 Nine times Troup’s Scott Hicks walked onto the mat during the Dariel Daniel Grind, and nine times he pinned his opponent.

That’s as dominant as you can get, and based on that overwhelming performance Hicks was named the most outstanding wrestler in the upper weights.

The most outstanding wrestler in the lower weights was Chase Seals, who also went 9-0 with six pins.

Those two seniors helped Troup win the tournament championship with a 9-0 record.

Both men are having outstanding seasons, and they’ll be among the favorites to win state championships.

Seals and Hicks both had their way with their opponents during the Dariel Daniel Grind, and they finished things off with victories against Carrollton in the final match.

Seals was first onto the mat and he won by pin in the first period while leading 5-0.

Next up was Hicks, and he pinned his opponent with 52 seconds left in the second period.

While Hicks rolled through each of his opponents during the tournament, it was a physically taxing two days for him.

“When I got home (Thursday), between wrestling five times and keeping your weight down, I had a headache all day,” Hicks said. “And then waking up this morning, you don’t feel like it. You’re just physically drained. Overall, it’s taxing.”

As he has done nearly every time out this season, though, Hicks found a way to win.

Hicks lost his first match this season, but he hasn’t lost since and he’s 34-1 following his performance in the Dariel Daniel Grind.

Seals and Hicks will look to lead Troup to a repeat championship in the Area 5-AAAA duals on Jan. 6, and the state finals begin on Jan. 11.

The traditional area tournament is on Jan. 7, and that will be followed by the state sectional and the state finals.