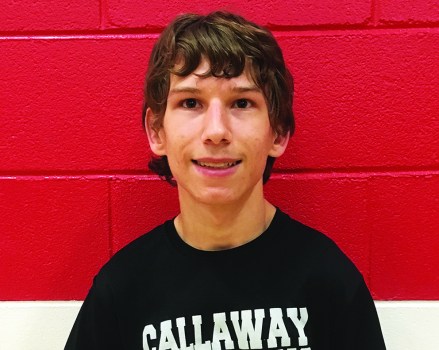 It was a special day for Callaway’s Brandon Belton.

Belton has been a member of the Callaway wrestling team for four seasons, and while he has enjoyed every moment of it, wins have been hard to come by.

Last week during the Callaway Classic, Belton had his best day as a Cavalier when he won two matches, both by pin.

For any wrestler, that would have been reason to celebrate.

For Belton, who has overcome some physical shortcomings, it was a particularly meaningful moment.

“It means a lot,” Belton said. “Me, I’m not really a very good wrestler, so whenever I do win, it means a lot.”

Because of his physical issues, Belton has difficulty walking, and he doesn’t have the strength of many of the wrestlers he goes up against.

Belton has never asked for any special favors on the mat, though, and he has worked diligently in the wrestling room to make the most of his strengths.

Belton didn’t win any matches his first two seasons, but he enjoyed a breakthrough victory at the Chattahoochee River Wrestling Association tournament in 2016.

“He went at least two years without winning anything,” Callaway head coach Jason Boatman said. “I remember the CRWA last year, he beat somebody for the first time in an actual match, and we were so excited for him.”

Now a senior, Belton is having his most successful season, which included last week’s two-pin performance.

As an example of how much progress Belton has made, Boatman reflected on a match against Haralson County earlier this season.

“He was getting beat the whole time, but he was doing OK,” Boatman said. “It got to the third period, and he’s good at cradles. He likes doing that, and he’s got good grips. He was getting beat probably by 10 points, but he makes it to the third period. He’s learned to fight really hard. I told him to go top, and I made a cradle motion, and right off the whistle he set it up perfect, and he hit it, and he kept the other person in the cradle the entire period. He was working to try to pin him, and he was so close, but the other wrestler did a good job of wiggling out. A few years ago, he wouldn’t have done anything like that. It shows how much he’s grown over time.”

Belton appreciates his coaches and teammates who have helped him become the wrestler he is.

“It means a lot to have them,” Belton said. “They push me every day at practice to work hard.”

Belton and the other Callaway wrestlers will be in action on Friday and Saturday in the Gary Silva Invitational.

The tournament, which is hosted by LaGrange High, will be held at Gardner Newman Middle School.

“It’s an opportunity to get in-match experience, and get those reps,” Boatman said. “We all know what next week is, and we’ve been preaching and talking about it for a long time.

“So we’re just using this an opportunity to hopefully fine-tune some things and fix any problems we had during our tournament (the Callaway Classic), and just keep learning and growing, and hopefully build some momentum into next week.”