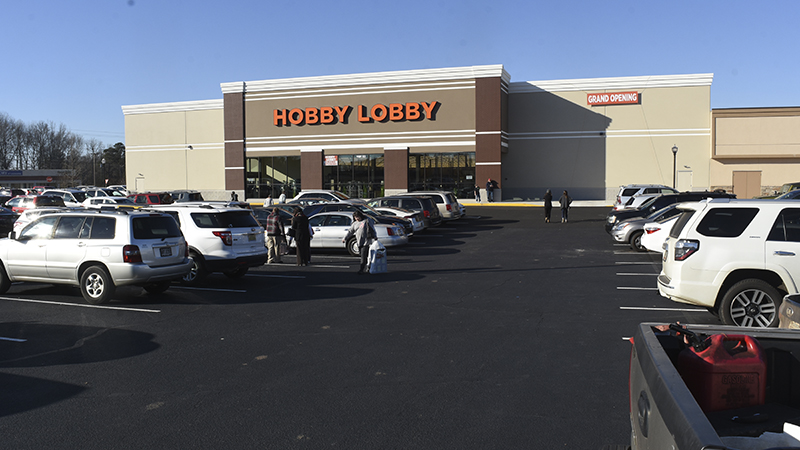 When store manager Tory Faulk opened up the doors at Hobby Lobby Friday, he expected the first hour to be pretty quiet. After all, the official grand opening is Monday, and Friday’s “soft opening” had not been advertised.

Instead, there were 30 people in line, waiting to get into the store. People in LaGrange have been waiting about 12 months for Hobby Lobby to open, and they took full advantage of the store’s first day.

“I thought the first hour would be pretty quiet until they realized we were open, but it’s been very pleasant surprise how the community has come through and come in to see what’s going on,” Faulk said. “It’s been busy all day.”

The store was first announced in January of 2017, and since then the anticipation has been growing from locals. Many were thankful for a local arts and crafts store, so they won’t have to travel out of town anymore.

“I don’t have many options to go out and find yarn because there’s not much [locally],” said Deborah Brown, who was driving to Newnan or Opelika, Alabama twice a month. “At least two times a month, I’m out of town trying to find yarn.”

The parking lot was full as consistent foot traffic went in and out of the store. Many found out the store was open through word of mouth and social media, but others saw the large grand opening signs from Lafayette Parkway.

“LaGrange needs more stores like this in this town to make it grow and to see that growth here has been nice,” said Amy Rayfield, who was shopping in the store. “Having Hobby Lobby is a bright spot for LaGrange.”

Faulk is a Troup County native who attended Troup County High School. He has served as the store manager at the Newnan Hobby Lobby store for the last seven years.

Now he’s back home in LaGrange, where he oversees a store of approximately 55 employees.  He estimated 85 percent of those employees live in Troup County. The store’s official grand opening will be Monday at 9 a.m., when a ribbon cutting will be held. Chick-fil-A will also be there to give out chicken minis, Faulk said.

“A lot of people are anticipating us opening Monday, so I think Monday will be busy,” Faulk said.

Year in Review Part II: Summer months were a…