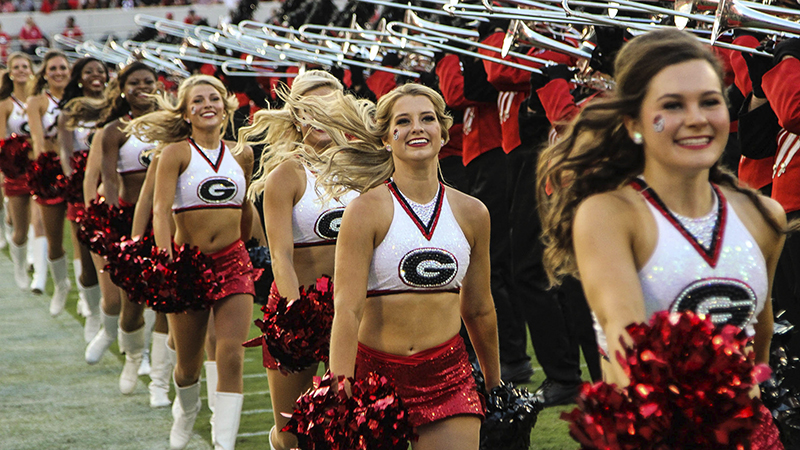 For the second time in the history of the Rose Bowl, the University of Georgia will be competing in the iconic game, and this year graduates from all three of the Troup County School System’s high schools will perform on the field at the game.

Georgia will face Oklahoma in the Rose Bowl, which kicks off at 5 p.m. ET on New Year’s Day. Of course, this year’s game is not just a “normal” Rose Bowl, considering it’s also a semifinal for the College Football Playoff. The winner of the game will move to face the winner of the Clemson-Alabama game in the College Football Playoff National Championship Game on Jan. 8 in Atlanta.

Callaway High School graduate Terry Godwin, who leads Georgia with six receiving touchdowns, will likely play a prominent role in determining the outcome of the game, but he won’t be the only local in the spotlight.

Hallie Hale, a member of the Georgettes, and Duncan Lord, a member of the UGA band, of LaGrange will also be performing in the Rose Bowl parade and halftime shows. Hale attended LaGrange High School, and is now a junior studying business management at UGA.

The Georgettes is an 18-member dance team, and according to Hale, the team was already preparing for the long march that it will take part in on Jan. 1 at the parade.

“Since the parade is 5 ½ miles, our coach has been wanting us to walk in the boots that we walk in at least five times for five miles, so I’ve been preparing for that,” Hale said. “Just getting in shape and making sure we are in tip top shape to perform in front of thousands of people.”

Lord attended Troup County High School, and he is now a senior at UGA. He is a member of the UGA Trombone Studio, and he said that he is excited to be marching in one of the biggest parades of the year.

“It is extremely exciting,” Lord said. “It is the parade that everybody wants to march in, and it is not even normally open to SEC schools, so it is a big deal that we get to go at all.”

Georgia, the SEC Champions, get to play in the Rose Bowl because it is one of the playoff semifinals this year. In traditional years, the Rose Bowl features teams from the Pac 12 and the Big 10.

The announcement that UGA would be part of the Rose Bowl came during finals week, so according to Lord, the news was still sinking in over a week later.

“Right now, we are just kind of waiting for it to sink in and become real,” Lord said. “It got announced during finals week, when we were taking finals, trying to handle all of that mess, and now that the break has happened, it is only just now dawning on us that, ‘oh we are actually going to get on a plane fly all the way to California.’”

Both the Georgettes and the band were scheduled to fly to California on Friday.

The Rose Bowl Parade will be broadcast live beginning at 11 a.m. ET on ABC and NBC.