Year In Review Part III: One last look back at a big year 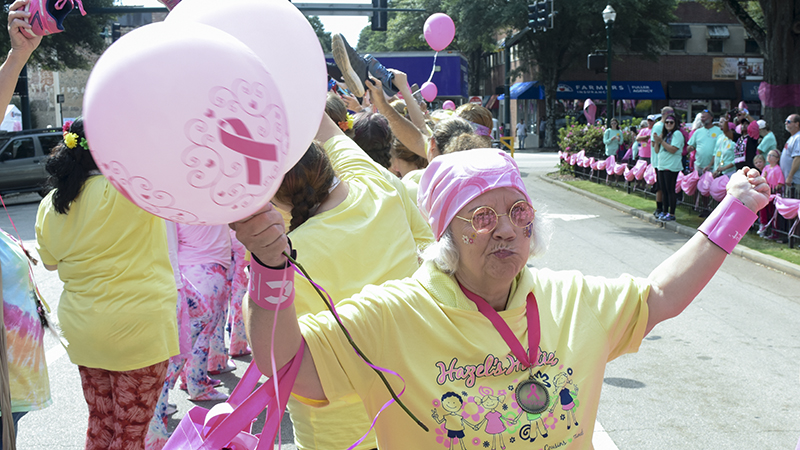 Susan Gaddy Banner dances after walking through the line of breast cancer survivors during Paint the Town Pink. --File Photo

EDITOR’S NOTE: This is the final part of a three-part series looking back at the year 2017 in Troup County.

to church in Texas

Two 12-year-old children drowned at Earl Cook Beach in September. The children were identified as Carson Woodall and A’jada McGuire. Both were from the Atlanta area, and according to the Troup County Sheriff’s Department, they were in town for a family reunion at West Point Lake.

A LaGrange couple was arrested Wednesday on charges of insurance fraud, identity theft, forgery and exploitation of an elderly person after a lengthy investigation by the fraud division of Georgia’s Insurance and Safety Fire Commission. According to a press release from the Georgia Department of Insurance, Amy Livingston, 34, and her husband Matthew Livingston, 48, were arrested at their home on Newton Road in LaGrange after a six-month investigation by the fraud division. The investigation found that Amy, an active insurance agent, and Matthew, a former insurance agent, used the identities of Matthew’s former clients to create and submit fraudulent applications for life insurance without the client’s knowledge or approval.

Holiday Campground opened to allow those fleeing the hurricane a free place to stay during the storm. Most were prepared to sleep in campers, and others had tents. However, when the storm turned toward LaGrange, the campground had to close and evacuees went elsewhere.

The Troup County Board of Education voted unanimously to drop the word “Comprehensive” from the name of Troup County High School in September.

The Town Council of Pine Mountain voted against a DASH project that would’ve resulted in 50 low-income homes. The council voted 4-0 against the project.

The Troup County School System voted to approve gymnasiums at Troup High School and LaGrange High School in October. The estimated total cost of the two gymnasiums was around $25 million total, well above the original cost projection of $18 million.

Chief sworn in as IACP president

LaGrange Police Chief Lou Dekmar was sworn in as the new president of the International Association of Chiefs of Police in October in Philadelphia.

Great Wolf Lodge announced it will open in LaGrange May 31, 2018, and reservations can be made now.

The leak was discovered in the woods between Poplar and Boozer Streets from a pipe that had no current documentation from the city. City Manager David Milliron said the Pine Street tank emptied an estimated 75,000 gallons of water within minutes.

$1.6 million worth of marijuana found during traffic stop

Jim Thornton (LaGrange), Bill Stankiewicz (Hogansville) and Steve Tramell (West Point) were re-elected mayor in their cities in November. Tramell had served as Mayor Pro-Tem and November’s election was a special election. He was elected over Deedee Williams by 25 votes in the closest race in Troup County.

connection with fatal hit and run

Scott Sparks was arrested in the case of a hit-and-run on Pyne Road that resulted in the death of a 78-year-old LaGrange man.

Sparks was charged with reckless driving, homicide with a vehicle, hit-and- run (injury, death, damage), driving too fast for conditions, duty to report accident (injury, death or property), failure to maintain lane and leaving the scene of the accident. George Allen, of LaGrange, was killed in the accident.

Hours before No. 10 Auburn upset No. 1 Georgia, fans from both teams enjoyed a special day on the Alabama-Georgia state line. Chick-fil-A set up a rivalry restaurant on the state border and gave out free food. The game was also shown on a gigantic big screen television.

TCSO exhausts all resources in search for missing woman

After days of constant searching, the Troup County Sheriff’s Office determined it had exhausted all resources in the search for 75-year-old Carol Evans. Evans went missing Nov. 10. The sheriff’s office is still investigating any leads it receives in the search for Evans.

Two men in a stolen 1999 white Dodge Ram drove into Givorn’s Foods in Valley and stole the store’s ATM. The suspects left the store in approximately six minutes.

On Dec. 15, an unidentified man robbed Charter Bank at 2231 West Point Road at gunpoint. According to the Troup County Sheriff’s Office, no employees were harmed during the robbery, and an undisclosed amount of money was taken.

The Courtyard by Marriott hotel officially opened its doors in mid-December, after getting the green light from Marriott officials. The hotel features 90 rooms.

a putting green and fitness center.