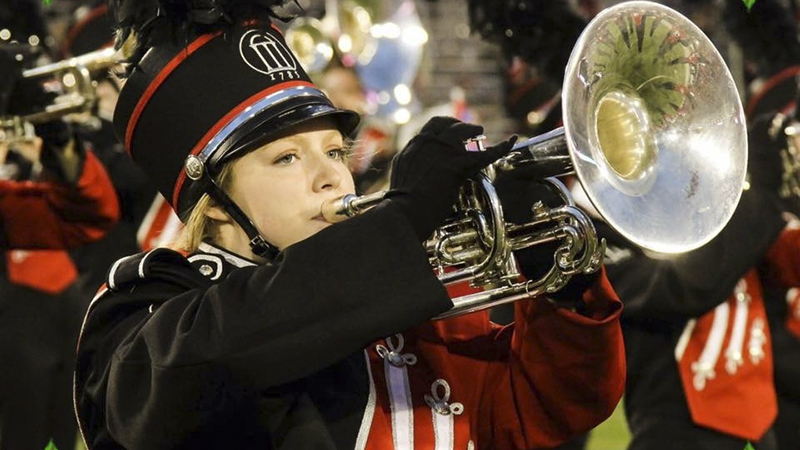 Jennifer Aplin is a 2017 graduate of Troup County High School and is currently a freshman at the University of Georgia majoring in Music Education. This is her first year in the UGA Redcoat Marching Band. This is her second year to march in the Tournament of Roses Parade. She marched in the January 2, 2017 parade with the Bands of America Honor Band in the 2017 Rose Parade. (Contributed)

While former Callaway Cavalier Terry Godwin was impressing fans on the field during the Rose Bowl, other students from Troup County performed with the Redcoat Marching Band and Georgettes during the game and the halftime show.

The game was a nail biter for fans, with Georgia pulling off an overtime win, but for the students who got to attend, the close game only made the experience that much more exciting.

“It was incredible, more so than anything I’ve ever done before,” said Jennifer Aplin, a freshman music major at the University of Georgia.

Aplin and Duncan Lord, a senior at UGA, are both Troup County High School graduates who performed in the Roses Parade and the halftime show as part of the Redcoat Marching Band. Hallie Hale, a LaGrange High School graduate, also took part as a member of the Georgettes.

“I’m so grateful to have been a student during the heart wrenching, history making game,” Hale said. “The UGA tradition of ‘Lighting Up Sanford during Krypton in the 4th quarter’ was ever present even in Rose Bowl stadium. It reminded everyone that Dawgs travel and travel to win. I can’t wait to light up Mercedes Benz [stadium] next week in the national championship game against Alabama.”

Aplin also performed in the parade last year with the Bands of America Honor Band, but she said that this year was even better because of the game afterward.

“It was such a great game, and at the very end, all the emotions,” Aplin said. “I have never felt so many emotions in such a short amount of time, and just to see the faces after the game — the crying and the hugging, the celebrating.”

The students said that they enjoyed the opportunity to be part of such an important game.

“It was truly an incredible opportunity to be a part of a team, band, fan base and university that really is the greatest in the land,” Hale said. “The parade lived up to its name ‘the granddaddy of them all.’ Even exhausted after dancing for five miles, I was constantly overwhelmed and encouraged by the strong UGA representation in the stands.”

Working on working out