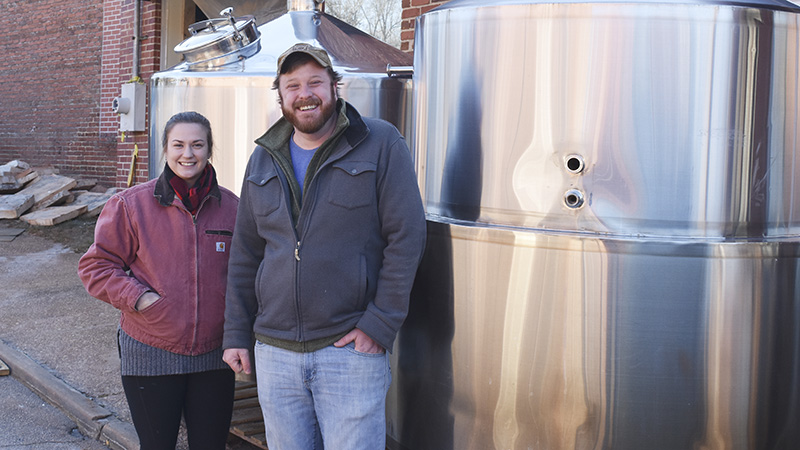 Brewer Liv Lawnick and owner Chase Hudson of Beacon Brewing Company pose for a photo outside the location of their brewpub in the Hillside neighborhood this summer. --Alicia B. Hill

Some of downtown LaGrange’s best known restaurateurs announced Thursday that they plan to open LaGrange’s first brewpub in the Hillside neighborhood this summer.

Beacon Brewing Company will combine a variation of the farm to table cuisine that C’sons and Mare Sol are known for with the expertise of an in-house brewer to create an experience that owners hope will not only impress visitors, but reinvigorate the Hillside community.

“All of the old mill villages around town were built with mills at the heart of them, and when you took the mills out, a lot of them kind of withered away, and they didn’t really have anything over here in any of the mill villages,” Owner Chase Hudson said.

Renovations on a building that once held a furniture store and a tavern are currently underway, and the brewpub even took inspiration for its name from the Callaway Beacon, a newsletter that was released by Callaway Mills during the 1950s.

“In the 40s and 50s, when Callaway Mills was over here they put out a newsletter called the Callaway Beacon, and so we just kind of borrowed that name to put some of the original life that was over here back,” Hudson said.

Beacon plans to take full advantage of food and beer pairings, but local interest will also play a major role in what is offered at the brewpub.

“It is not just incorporating local ingredients from the farm and from the region, but it is also being able to curtail to the specific desires of [the community],” Brewer Liv Lawnick said. “Since we are a brewpub, that is the advantage versus something larger. We have smaller batches versus large masses. That is one of the things that I really like about craft beer.”

Beacon will serve a simpler style of food than Hudson’s other restaurants, but local flavors and flare are still set to be the focus of the menu.

“We are going to have a food truck behind the brewery, and it is going to be a pretty simple menu,” Hudson said. “It’ll be kind of what I like to call Troup fusion, so it is going to have a lot of Korean flavors like Korean tacos, some sliders, some ramen bowls and eventually some various wings and fries and stuff like that. Pretty simple, but we’ll put our own little flare on everything.”

The brewing side of the business also hopes to bring fresh flavors to local beer drinkers including a less common craft beer — lagers.

“We have more fermenters than a brewery our size really needs, so because of that — with brewpub laws it limits the amount that we are allowed to produce — because of the amount of fermenters we have, we are really going to do a lot more lagering,” Hudson said. “We are going to focus on doing a lot more lagering then I think a lot of Georgia breweries are doing just because it takes more time.”

IPAs, ales and saisons are also expected to be part of Beacon’s line-up.

“We are looking to start out with three core beers and then seasonals as well as rotating specialty beers, and I am really excited about being able to exercise creativity and give the people of LaGrange craft beer in different flavors and styles ranging from lager to pilsners to — everyone’s got an IPA — but really branching out and expanding the styles,” Lanwick said.

Two new breweries opened in Troup County in 2017, and while some might worry about competition, Hudson considers having other craft breweries and brewpubs nearby a good thing.

“Originally, when we were talking to Wild Leap when they were first talking about coming down here, our long-term goal was to end out with at least three breweries in LaGrange, maybe a distillery and kind of the more the merrier,” Hudson said. “Make LaGrange more of a destination (because) I think that helps all of us. If you are afraid of competition, you aren’t doing it right.”

That doesn’t mean that Beacon won’t make a point of standing out from the crowd though. As the head brewer, Lanwick hopes to use her background in chemistry along with what she learned from a course the American Brewers Guild to create a memorable drinking experience for guests.

“I want to make beers that people want to have and will be able to have more than one of,” Lawnick said. “There are some beers on the market that are just one and dones. Like you have one 6 ounce glass of it, and you are done. That is your legal limit. I want to make craft beer approachable and enjoyable by a large number of people. …The most meaningful conversations last more than one beer, so having people enjoy themselves for more than one is the goal. More than one and still be responsible.”

Lanwick hopes to accomplish this by focusing on the ingredients and process from “grain to glass” in all of Beacon’s beers.