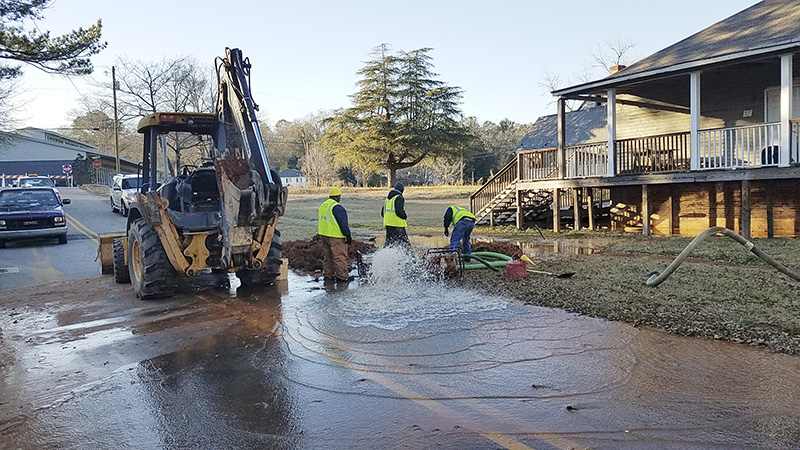 HOGANSVILLE — Citizens of Hogansville came together on Thursday night to help workers attempting to repair a water main break on Marshall Avenue during below freezing temperatures.

At 3 p.m. on Thursday, the Hogansville Public Works was notified of a water main break on the 100 block of Marshall Avenue which would take until almost midnight to repair, according to City Manager David Milliron.

The break is believed to have been caused by this week’s extreme temperatures.

“The bone-chilling temperatures that have left the region shivering this week is responsible for this and the overall increase in water main breaks throughout the city,” said Millron in an e-mail.

“A sudden drop in temperature shocks the pipes and when water temperatures drop below 40 degrees, the pipes become brittle and more susceptible to breaks.”

The leak was repaired with assistance from Crawford Grading & Pipeline, Inc., but they weren’t the only ones who lended a hand on Thursday night.

Residents, including Mayor Bill Stankiewicz, came out to check on the crew as they worked, and several residents, including Police Chief Brian Harr, provided food and warm drinks for the workers to make sure that they would be able to keep warm. Residents gladly made a point of doing what they could for the workers, while recognizing them for their service, Millron said.

“All the hard work was done by the public works crew,” said Harr, who lives near where the pipe burst and brought hot chocolate, sandwiches and soup to the workers.

Millron said that he was grateful for the residents as well as the workers for living up to Hogansville’s claim to be “The City of Friendly People” on Thursday.

“In my 10 plus years of managing city government, never have I witnessed such an outpouring of love from a community, especially given the number of homes who were without water,” Milliron said.

“For that, I say thank you for showing so much love to our public works crews.”

Although the kindness from citizens was a warm moment in a cold week, it sounds like repair crews could be in for a long weekend.

As of Friday afternoon, other repairs included an underground water leak on Johnson Street by East Main Street and issues on the 500 block of Green Avenue, the 4800 block of Mountville Hogansville Road, the 300 block of Taliaferro Drive and the 200 block of Greenough Street.

The city was also assisting the Hogansville Housing Authority with an emergency sewage spill on the 200 block of Lawrence Street.

If you are a City of Hogansville utility customer and experience a service disruption, contact City Hall at (706) 637-8629 during normal business hours.