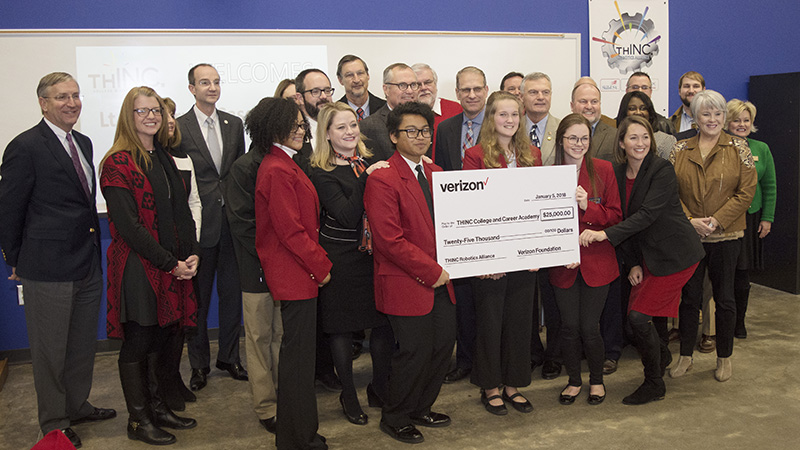 The Robotics Alliance at THINC College and Career Academy has already been successful on a national level, and after a donation from Verizon Wireless there’s no telling what the students might accomplish.

Verizon made a $25,000 donation to the Robotics Alliance Friday in a special ceremony at the school. The Robotics Alliance is an extracurricular, student-led organization that allows students to develop leadership and soft skills and expand on their knowledge in STEM subjects.

“Students get excited because it’s time to up your game on all the cool things you are going to be doing,” said Julie Smith, a representative for Verizon at the ceremony.

THINC students have already shown how talented they are this year in robotics competitions around the state and country. THINC students won first place in four categories at the SkillsUSA Georgia State Championship in Atlanta in April and brought home 12 gold medals. The team also went on to compete in the national championships in June in Lexington, Kentucky.

“If someone had told me what I would accomplish with THINC beforehand, I would not have believed them,” Griffin said Friday as one of the speakers at the presentation.

“To think that right here out of LaGrange on a national level, we had a second place team, a fifth place team and the first all-girls team, that is remarkable,” Cagle said. “It’s so much to celebrate and none of it would be possible without the great partnership of the technical college, which we value deeply … the board of directors, all the instructors that step up and the students that are a part of this great journey.”