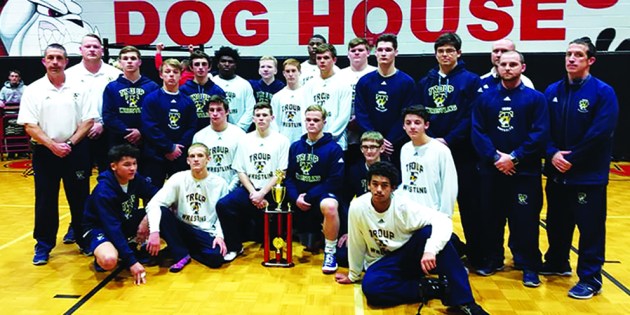 CEDARTOWN – They took care of business.

The Troup Tigers went 3-0 and beat Central-Carroll in the championship match to win the Area 5-AAAA wrestling duals on Saturday.

It was the second consecutive area championship for Troup, which will compete in the state duals this week in Macon.

Troup opened with a 67-12 win over Cedartown before beating Cartersville 65-12 to reach the championship round.

Troup started quickly against Central-Carroll, and it rolled to a 51-21 victory.

LaGrange finished third after falling to Central-Carroll in the semifinals.

“We wrestled really well today,” Troup head coach Craig Garner said. “We hope we’re starting to put it all together. Hopefully we can keep the momentum going.”

Troup came into the area duals as the number three seed behind top-seeded Central-Carroll and second-seeded Cartersville.

“We had a fairly close match (with Central) at our duals, and ended up losing having to forfeit a match,” Garner said. “We kind of gave them a pep talk, and they had a little chip on their shoulder being the number three seed. We got them fired up to wrestle that final match.”

Trevor Upchurch was up first for Troup against Central, and he won by pin, and Garner said “we got some momentum going.”

Brantly Robinson won the next match, and Cade Garner, Chase Seals and Scott Hicks followed with pins, and Troup had a commanding lead.

The state duals will be held Thursday through Saturday in Macon.