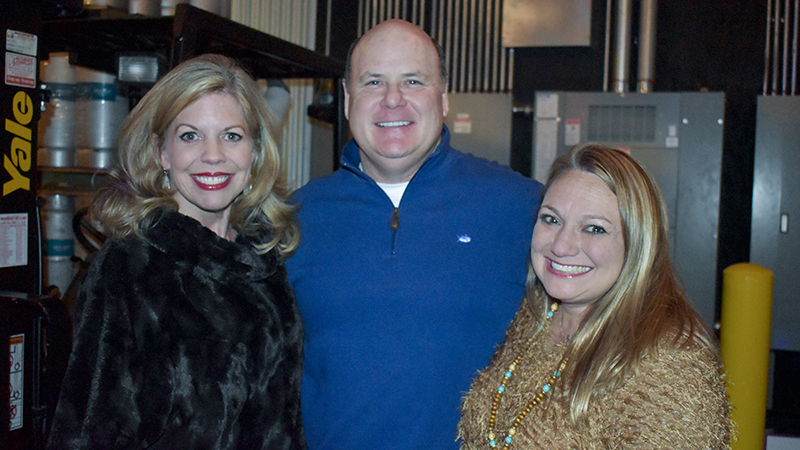 Crowds of locals at Wild Leap Brew Co. is becoming an increasingly common sight in LaGrange, but on Saturday, that crowd hoped to change lives while having a good time.

Twin Cedars kicked off its annual Behind the Mask fundraiser with Twelfth Night on Saturday. Candidates for King and Queen of Mask enjoyed a little friendly revelry over music, food and drinks.

“This is the first time that we’ve had our kick-off party at Wild Leap, but every year on the twelfth night after Christmas, we have our kickoff,” Lisa Wicker, senior marketing coordinator for Twin Cedars. “That is the official start of the race, even though our candidates have been running for a while.”

According to Wicker, Twin Cedars hopes to break the $500,000 mark this year in the sixth year of the fundraiser. The current total is about $400,000. That goal just might be possible with several candidates presenting ambitious goals at Twelfth Night, and with all the funds raised by this fundraiser remaining in Troup County, there is a very real chance that this year’s fundraiser will change the lives of local children.

“This is our biggest fundraiser of the year,” said Al Zachary, the chairman of the board at Twin Cedars. “… This is our sixth year, and it all started when we sat around and thought, how can we raise a little money, and I think the first year I was just hoping people would show up, that we would get enough people to fill Del’avant. Then we got the king and queen and ball aspect, and that is when it really took off and went from a party that raised a little money to being a real high impact fundraiser that involves the whole community. It is also an opportunity for a lot of people in the community who don’t know Twin Cedars to learn about it.”

Some of the programs that will benefit from the funds raised are the Bradfield Center, the Troup County Prevention Coalition, the Child Advocacy Center, Darkness to Light, Safe Families and Therapeutic Foster Care. Members of Twin Cedars realize for many, that is just a list of names and embrace the annual fundraiser as a way to tell the community about the programs.

“We make friends every year,” Whicker said. “It is not just a fundraiser. It is a friend-raiser, and our candidates are here from years past tonight, so they come back year after year to support (Twin Cedars).”

The funds are important though, since they bridge the gap between what funding is needed for local programs and what the state government and grants will cover. The following candidates hope to be a major part of bridging that gap in the upcoming weeks:

McWhorter works at Synovus Bank, formerly CB&T, and she is the third candidate from the bank to run on the royal court.

“I am excited to be helping this wonderful organization by raising money, and hopefully we’ll do a great job this year,” McWhorter said.

McWhorter will host a barbecue fundraiser on Jan. 19. Tickets are available at Synovus Bank. Kimble’s cornflake candy will also be sold.

Some of the candidates had already begun their fundraising efforts. Pelt hosted an event earlier in the day on Saturday, but she hopes to raise far more for local children this month.

“I work with the school system as an exceptional education paraprofessional, so I love children, especially children who need attention, the underdog students, the underdog champions,” Pelt said. “I like to work every summer at Camp Viola with our church, so I am just excited to be here and do everything I can to bring some awareness specifically to the Bradfield Center and Alt Academy.”

Pelt plans to host the Ragin’ Cajun run on Jan. 20. The event will start that morning at the greenspace beside The Thread.

Harrelson and Nancy Bradfield hope to raise more as a team — both in terms of funds and awareness — but their experience will also bring some of their own personality to each fundraiser.

“I worked seven years in the anti-human trafficking field and got to know Twin Cedars through that,” Harrelson said. “I started reading over everything that Twin Cedars does today. It is just so comprehensive, the amount of care that they provide to the kids in west Georgia and east Alabama.”

Harrelson plans to host a fundraiser at Tumbletown 2 on Sunday from 2 to 4 p.m called Tumble for Twin Cedars.

Bradford challenged the audience to learn more about Twin Cedars and its programs.

“This has caused me to dig in and really read up and find out what exactly Twin Cedars does do for the community, and not just our community, the whole area, the whole region,” Bradford said.

Bradford plans to host a dance party fundraiser at Towne Fitness on Jan. 16. A wine and cheese party are to follow. Anyone who dine at Mare Sol that night can help give back by telling their server that they are with Twin Cedars to give back 5 percent of their meal price to Twin Cedars.

Silcox said that she wants to share her blessings with the children in Twin Cedars programs.

“I taught kindergarten for a very brief time in my life when I was trying to figure out what my path would be, and my children I taught were probably these children that we are representing here and helping and raising money for just so they maybe can have a second chance in life,” Silcox said.

McCoy is sponsored by former King of Mask, Dale Jackson and Jackson Heating and Air.

“(I’m running for) the kids, for Twin Cedars,” McCoy said.

Jackson plans to play a major role in this year’s fundraising efforts.

“I’ve cherished the time we’ve had each year — this is the third year that I’ve acted as either king candidate or campaign manager — but this year I thought who better to have than our public relations ambassador Tyler McCoy to run and represent Jackson Heating and Air and raise money for an amazing organization like Twin Cedars,” Dale Jackson said.

McCoy and Jackson are currently working on several community based fundraising ideas, and they hope to raise a record amount of funds for Twin Cedars.

Some candidates are taking part because they feel a personal connection to the children at Twin Cedars. Henderson felt that profound connection when he spoke to some of the children as part of a program.

“They called me about this opportunity to come speak, and I was just overwhelmed,” Henderson said. “To have come from that, and now to be successful — right now, I have one of the largest trucking companies in the state of Georgia and probably Alabama too — that was an opportunity for me to give back to these kids and let them know that they can make it.”

Henderson hopes to raise funds for these children who remind him of himself as a child.

“The From Darkness to Light presentation hit home for me,” Hall said. “It is very personal for my family, and I thought, we often have a propensity to get caught up in our day to day lives — making money, starting families — that we often lose sight of those most in need in our community.

Wild Leap Brew Co. co-owner was excited to be able to take part in the event and offered to assist other candidates in their campaigns for the charity.

“I wanted to look for a way to get involved in the community, and luckily Al Zachary called me and offered me this opportunity,” Rodriguez said. “I am just excited to be a part of this. Twin Cedars is a great organization.”

For many, their fundraising campaigns this year are part of years of getting to know Twin Cedars.

“Twin Cedars is a great organization that my business family has been involved with for two or three years in some form or another,” McGinty said.

Frailey did not attend the event, but is rumored to have been working on a fundraising idea at the time of the event.

A king’s bourbon, whiskey tasting will also be hosted to raise funds for Twin Cedars at the Cochran Gallery at 4 East Lafayette Square on Jan. 26.

“We are going to have a little whiskey tasting with the kings and queens,” Mike Angstadt said. “All the kings and queens, carte blanche you are welcome to come, and we have 100 tickets for only $25 a piece to see some great art and see some barrier busting at its best and to maybe make a pathway for unity for our community and the people that follow us.”

The winning candidates will be announced at the Behind the Mask Ball which will take place on Jan. 27 at Del’avant. The Atlanta Funk Society is scheduled to perform at the ball. Tickets to the ball are $75 and may be purchased online or by calling Joanna Angstadt at (706) 616-2526.

To learn more about Twin Cedars or the candidates, visit Twincedars.org.