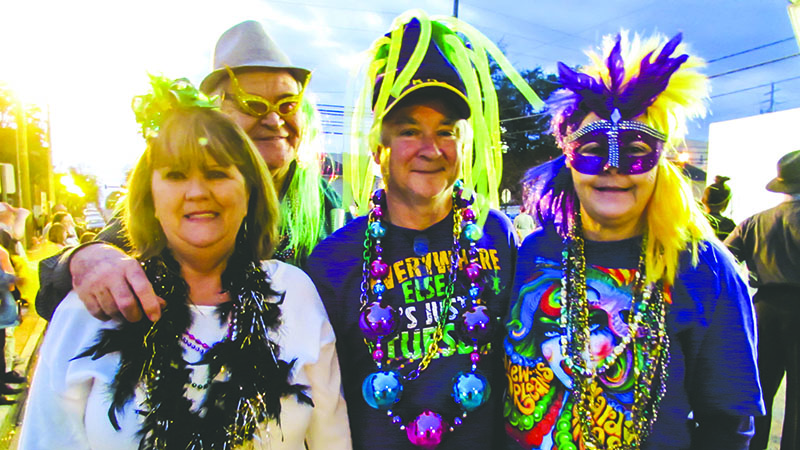 On the first weekend of February, downtown LaGrange will look a little bit like downtown New Orleans as the second annual Mardi Gras parade is held.

The parade will be hosted Feb. 3 by Krewe of Mask, a member organization that oversees the parade and a downtown Mardi Gras party that evening. The parade will start at 7 p.m. and will include floats, fun and all of the positive elements of Mardi Gras, according to Goose Boudreaux with Krewe of Mask.

“A lot of people think Mardi Gras and New Orleans, and they have pictures of the bad things in New Orleans that happen during Mardi Gras. We want all the good parts of Mardi Gras, which are the favors, the lit-up floats, people marching and the fun part,” Boudreaux said. “We’ve made it very family-oriented.”

The theme of this year’s parade is mythical creatures, and that’ll be featured on doubloons tossed out at the event. Ken Gordon, another member of Krewe of Mask, said the first year was an important one because the parade went from an idea to a reality.

Now, in year two, Krewe of Mask is hoping the Mardi Gras celebration in LaGrange starts taking on its own shape.

“What we are doing is we are planting Mardi Gras in the soil of LaGrange. How is Mardi Gras going to be celebrated here? It’s going to be different from other places in the world because it always takes on a local flavor,” Gordon said. “I’m sure the flavor it takes on here is going to be a good flavor.”

During the parade, beads will be thrown as they are at most Mardi Gras parades. There will be a contest for best costume in the crowd as well, which Gordon is hoping will encourage people to dress up.

The Mardi Gras Party and Feast will be held at Del’avant from 6 p.m. until 11 p.m. Adults tickets are $75 and student tickets, which are for anyone 18 and under with an ID, are $25.

The part will feature music from Kenny Lewis and the Wild Turkeys, traditional Cajun food and a second line, a traditional parade popular in New Orleans.

Krewe of Mask members get to ride in a float in the parade and are given beads and other items to throw. They also get access into the party.

To purchase tickets to the party or to find out more about the parade, visit kreweofmask.com.