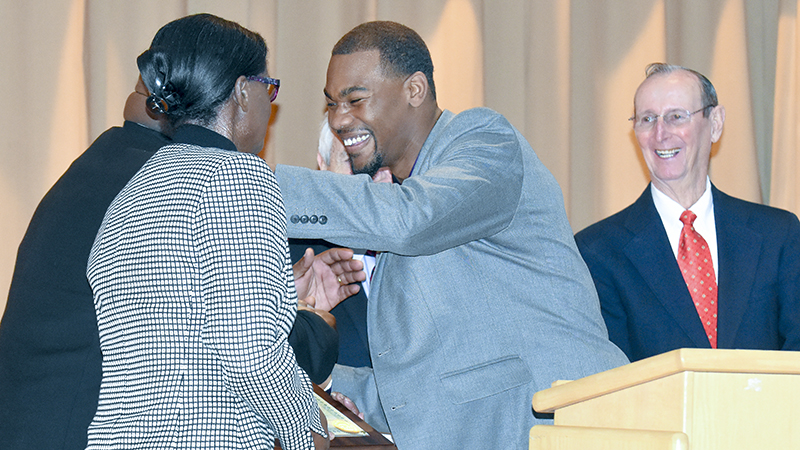 HOGANSVILLE — A proclamation from Mayor Bill Stankiewicz made Sunday Terry Godwin day in the city of Hogansville.

Godwin, who was born in LaGrange and played football at Callaway High School, played a key role on the Georgia Bulldogs’ football team, which played in the College Football Playoff National Championship game in Atlanta.

The proclamation was announced during Sunday’s Martin Luther King Jr. ceremony at Hogansville Elementary School. After the ceremony, dozens of people walked down to congratulate Godwin, get his autograph and to take pictures with him.

“It means a lot because I know when I come home, I’ve got this big support system behind me,” Godwin said. “Even when we weren’t in the running for the national championship or the playoff, this support system back home has always been the same.”

Georgia lost last week’s national championship game to Alabama 26-23 in overtime. The Bulldogs led 13-0 at halftime in that game and appeared to be in the driver’s seat much of the game.

“That memory right there will last forever,” Godwin said. “We got that far and didn’t accomplish it the way we wanted to. We’re going to go back and try again next year.”

Godwin caught four passes for 48 yards in the game. He finished the season with 38 catches for 639 yards and six touchdowns.

“Going into the season, we all knew it was going to be a special season because everybody was going to buy in, and do their part and provide what coach [Kirby] Smart needed this year and that’s what happened,” Godwin said.

Godwin announced Monday, he would return to Georgia for his senior season.

“I would like to thank the University of Georgia for everything they’ve provided me with these past three years and the chance of the NFL but after a [discussion] with me and my family and my coaches, I’ve decided to return for my senior year but 2017 was special and so will 2018,” Godwin said.

In his Georgia career, Godwin has 111 catches for 1,415 yards and eight receiving touchdowns. He also has three return touchdowns in his career and a rushing touchdown.