Roads are being treated, but officials warning people to stay off of them 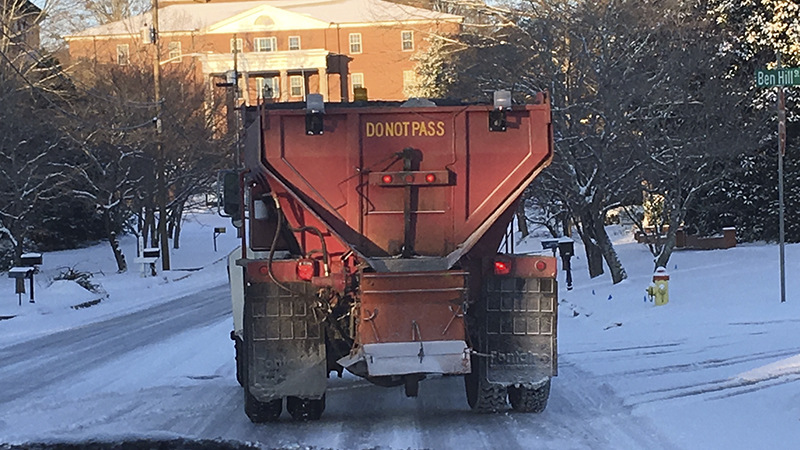 City officials and local law enforcement officers are asking people to stay off the roads until snow and ice from Tuesday night’s storm melt away.

Temperatures were expected to drop into the teens on Wednesday night, meaning any remaining precipitation could turn into ice.

“LaGrange residents are encouraged to stay home and off the streets at least until midday Thursday. City crews have been working to clear and treat main roads in the city,” wrote LaGrange Mayor Jim Thornton on his Facebook page. “[Wednesday’s] daytime temperature has not gotten above freezing and will drop quickly after sundown. Wet roads will refreeze overnight and be very icy and dangerous in the morning. Thursday temps should get above freezing by noon and hopefully melt much of the remaining snow and slush.”

Despite the roads being treated, officials were still warning people to stay off the roads for their own safety.

“It’s just ice covered in snow,” said Sgt. Stewart Smith with the Troup County Sheriff’s Office. “As the ice comes up, it’s melting some of the snow on the roads, but I don’t think the temp is going to lift any to make it any better.”

Snow began to fall around 10 p.m. Tuesday night in LaGrange and it didn’t let up until around sunrise, depending on your exact location. An estimated 3 inches fell in some spots, although it varied.

The wind chill was near 0 degrees in LaGrange Wednesday, leading to a wind chill advisory from the National Weather Service in Peachtree City. The advisory was expected to remain through Thursday morning.

The weather, icy roads and freezing temperatures led to all colleges and local schools to be cancelled Wednesday. The LaGrange Mall was also closed Wednesday.

More closures were also announced for Thursday. The Troup County School System  and LaGrange Academy both announced they will be closed, citing the snowy conditions.

Anyone needing to get out of the cold can go to the LaGrange-Troup Homeless Coalition’s Warming Center, which will remain open through Friday, Jan. 19.

The warming center’s hours of operation are 5 p.m. to 8 a.m. and it is located at 150 East Lukken Industrial Drive in LaGrange.

If anyone you know needs help getting to the Warming Center, you can call 911 or come to the LaGrange Police Department and an officer will provide a ride to the center.

The LaGrange Housing Authority also offers free transportation. There is a need for microwavable meals, soft drinks, and overnight volunteers. If you would like to volunteer, please go to www.tchomeless.com. For more information on road closures, school closings and other information, follow the LaGrange Daily News online at www.lagrangenews.com and on Facbeook at LaGrange Daily News.