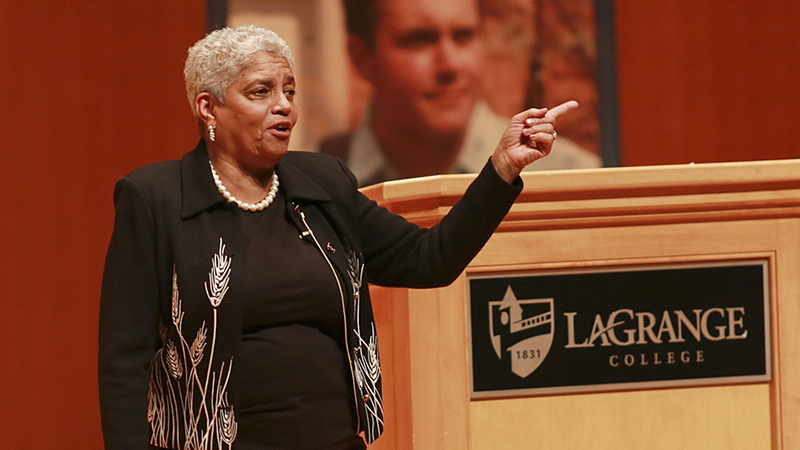 Despite the impending threat of snow, on Tuesday former Atlanta mayor Shirley Franklin, the first African American woman to be the mayor of a major Southern city, spoke at LaGrange College.

In her speech, Franklin discussed the legacy of the Rev. Dr. Martin Luther King and how to continue to honor that legacy almost 50 years after his assassination. Her speech emphasized equality and understanding as something that has to be worked for every day.

According to Franklin, that creation isn’t limited to just Georgia or even the South, and it is an ongoing process that continues today.

“Martin King’s life and death are a lesson in respecting the dignity of every living being,” Franklin said. “His vision of justice defined the Civil Rights movement as a universal movement. The Civil Rights movement of the south and Georgia’s roll in that movement is an historic, pivotal example of how a small, very small number, collection of people helped champion freedom around the world.”

Franklin encouraged the audience to commit to Rev. Bernice King’s call for a peaceful revolution with 50 acts of service and kindness between her speech on Monday and the 50th anniversary of her father, Martin Luther King’s assassination in April.

“We who celebrate the legacy of her father, the dreamer, should head her message and call to action,” Franklin said.

She said that our success as a nation will be built on hundreds of acts of service which hold the potential to change the country. That change, in her opinion, could be the deciding factor between “chaos and community,” and she hoped to see that change take place in Georgia again.

“As the world celebrates Martin Luther King, we in Georgia celebrate our native son,” Franklin said. “He was born, educated, nurtured and lived in Georgia, and his legacy lifts our aspirations to be more than we can be. The principals of nonviolence — nonviolence is a way of life for courageous people. Nonviolence seeks friendship and understanding. Nonviolence seeks to defeat injustice, not people. Nonviolence holds that suffering can educate and transform. Nonviolence believes that the universe is on the side of justice. All of these principals are as instructive today as they were for Mahatma Gandhi and Martin Luther King decades ago.”

Franklin commended LaGrange College and other local groups for their efforts to bridge racial gaps, especially on the day of last year’s Martin Luther King Day event at the college when the college president, mayor and chief of police apologized for their respective institutions’ failures in the murder of Austin Callaway in September 1940. The college president noted at the event however, that there is still a lot of work to be done.

“During her time as mayor of Atlanta, (Franklin) reached across racial and economic boundaries to improve the lives of the citizens she served,” said Dan McAlexander, the president of LaGrange College. “In hosting her, the college reaffirms its commitment to do the same work in our own community. We join in this work, aware of our own racially troubled past. It was after all 50 years ago last fall that the college belatedly complied with the 1964 Civil Rights Act by admitting its first black students. The oldest building on campus was built by slaves. We convene this event in a space that until about a quarter century ago, before it came to the college, was closed to all but white people. Like most colleges across this region, we have much in our past to overcome.”

LaGrange College now serves as the home for the Trustbuilding Initiative, and it seems to have already taken many of the feelings expressed in Franklin’s speech to heart based on recent affirmations of support for equality on campus.

“We have come too far to allow ourselves to go back,” McAlexander said. “Let us reconfirm our commitment to speak out against any speech and actions that demean any of God’s children. Let us pledge ourselves to speak and act for freedom, for equal rights, for equal justice and for equal opportunity, especially in these dangerous and dark times.”