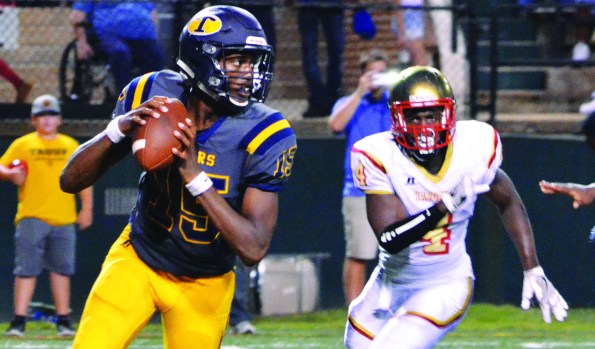 After a phenomenal senior season as Troup’s quarterback, Crowe had numerous options when it came to selecting a college home.

After taking a visit to the campus last weekend, Crowe decided that Savannah State, a Division II program, was the best fit for him.

Crowe made the announcement on his Twitter feed on Tuesday, and he can make it official on national signing day on Feb. 7.

Crowe also helped the Tigers enjoy a successful two-year stretch where they went 17-5 and made back-to-back appearances in the state playoffs.

Last season, Troup went 9-3 and reached the second round of the state playoffs.

Troup’s success was due in large part to an offense, led by Crowe, that was one of the best in the state.

Crowe also had a memorable performance against Sandy Creek when he was 20-of-29 for 525 yards with eight touchdowns.

Crowe made his first career start in the final game of the 2015 season when he helped Troup beat Whitewater to avoid a winless season.

Crowe stepped into the lineup as a junior and had a big season while leading Troup to an 8-3 record, and he was one of the state’s most productive quarterbacks as a senior.

Crowe was named to multiple all-state teams, and he was also a first-team all-region player.

Crowe, while undoubtedly excited about his future as a college player, is also looking forward to seeing what Troup can accomplish without him.

After the tough loss to St. Pius, Crowe encouraged the returning players to commit to making the 2018 season another special one.

“We just fell short of our goal. We know what our goal was (winning a championship),” Crowe said. “But I’m just telling the young guys to put it behind them. They still have a lot of talent. I keep telling them to get ready for next year.”

Here is Crowe’s full statement on his decision to sign with Savannah State:

“First off, I would like to thank God for giving me the opportunity to take my talents to the next level. Secondly, I want to thank my friends and family for the love and support throughout my career at Troup High School. Also, I would love to thank my coaches, my o-line, my receivers, my scout team guys and my teammates for coming to work every day and giving me even more reason to love the game of football as much as I do today.

Finally, I want to thank all the coaches that have recruited me but I am extremely proud to announce that I am officially committed to further my education and athletic career at Savannah State University.”