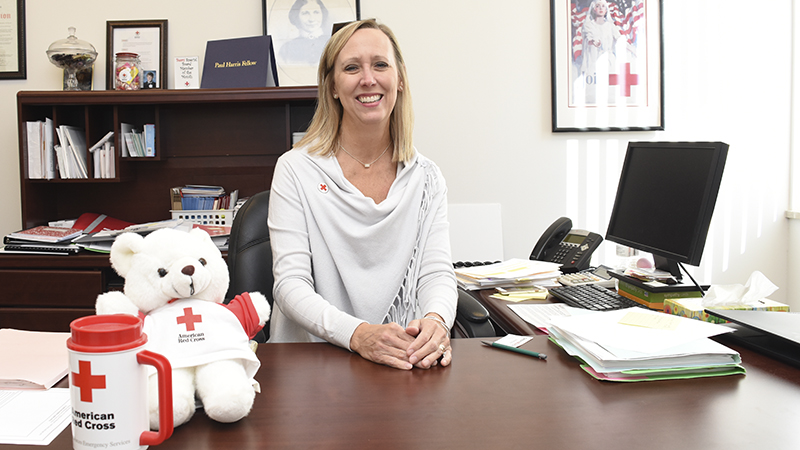 The American Red Cross of Central Midwest Georgia is in the midst of its 100th year in Troup County, but there hasn’t been a major celebration planned. Instead, the Red Cross has marked the milestone by doing the same thing it does on a daily basis — helping people in the communities they serve.

The Central Midwest Georgia chapter of the American Red Cross serves 20 counties, but it’s headquartered on Dallis Street in LaGrange.

“I think one of the really great things about Troup County in particular is the Troup County chapter was started in 1917. Not that every other county isn’t served because they are, but our headquarters has remained right here in Troup County for that 100-year time period,” said executive director Connie Hensler.

There have been some changes over the years. At one point, every county had its own Red Cross chapter, but through re-organization counties have fallen under other chapters.

The American Red Cross of Central Midwest Georgia also has locations in Macon and Warner Robins. Hensler is over both of them as well.

The 100th anniversary was official in May and was discussed at a volunteer meeting last year.

“We did have some commemorative pins,” Hensler said. “We have an annual volunteer appreciation dinner or meeting every year, and we go over year in review and where we’ve been in history this year. Barbara Hudson was the executive director of the chapter for 25 years, prior to retiring and then I came. She came and she really looked back at history and kind of led chapter through in her tenure. That was a neat time to reflect back on our history and share.”

Hensler said there’s a home fire in one of the 20 counties just about every night, and volunteers from the Red Cross are there to help those displaced. The 20-county area has 241 volunteers, Hensler said.

So what happens when Red Cross volunteers respond to a call, such as a house fire? They are always dressed in Red Cross gear, have identification and meet with the family to try to assess their needs.

“It’s usually a place to stay, if they don’t have friends or family to go with,” Hensler said. “Usually food and then funds for clothing and other necessities.”

The Red Cross can also help replace glasses and medication. After the initial incident, case workers follow up with the family to make sure they are getting their life back on track.

The nonprofit also has several other programs to help the community. One of those is Sound the Alarm campaign, where volunteers work with local fire departments to install smoke detectors in homes for free and talk to families about their fire safety plan.

In June 2017, the Red Cross and LaGrange Fire Department held a ceremony celebrating a family of seven that been woken up by smoke alarms blaring. The Red Cross had installed the smoke alarms in their home six months beforehand.

The hope is that many more lives will also be saved through the program.

“We are in the third year, and we started it with a target of doing it for five years to make an impact on fire fatalities and injuries,” Hensler said. “If you look back at a 20-year history, the number of (fire) fatalities is very stagnant.”

Another program through the American Red Cross is the Pillowcase Project, which is for children ages 8 to 11. The program increases awareness and understanding of natural hazards while also teaching safety.

Of course, many know the Redd Cross through their blood drives too.

The Central Midwest chapter of the Red Cross set up five shelters in Macon for Hurricane Irma, the area where the biggest need was for evacuees in their coverage area. As the hurricane shifted directions, they also asked how they could help in other communities.

“We have shelter trailers with supplies like cots and blankets and things like that,” Hensler said. “We have agreements in place beforehand of where we would probably open a shelter. There are requirements for spacing, showering facilities and things that help us know how many people can stay at a particular shelter.”

This past week volunteers checked in with EMA directors in local communities to see if there were any needs as winter weather hit Troup County.

In the past, the Red Cross has opened up shelters for Hurricane Katrina evacuees, responded to tornado outbreaks like the one in April 2011 and helped displaced families from the flooding of 2015. However, those are the major disasters that affect many.

On a daily basis, volunteers are helping families dealing with their own crisis.

In March, a breakfast will be held for hometown heroes. The Red Cross is currently taking nominations for the event.

There is also always a need for more volunteers, even if it’s just taking time to answer the phone.

“If you’ve got a heart to serve somebody, we’ve got a spot for you. I guarantee you,” said Perrin Alford, the director of the board of the local chapter of the Red Cross.