Voting closes for Behind the Mask 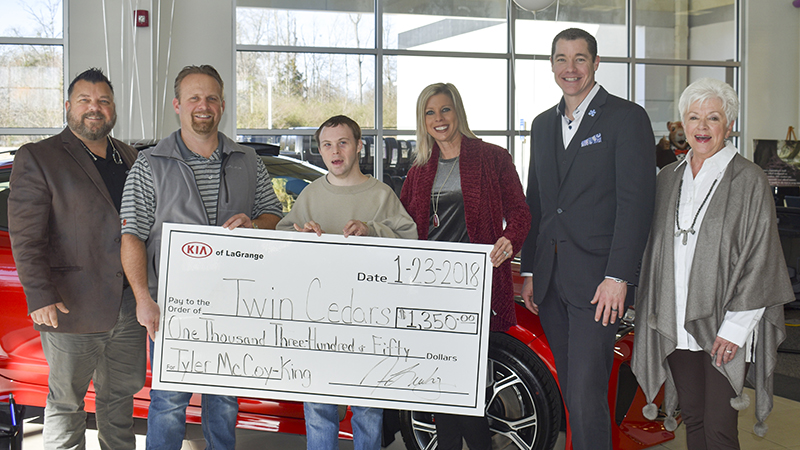 King of the Mask candidate Tyler McCoy accepted a check Tuesday morniing for Twin Cedars from Kia of LaGrange. Voting for King and Queen of Mask closed Tuesday at noon. --Alicia B. Hill

Voting for Twin Cedars’ King and Queen of Mask closed on Tuesday at noon, but not before this year’s favored candidate for king accepted one final donation from a local business.

This year candidate Tyler McCoy and former King of Mask, Dale Jackson teamed up in hopes of beating the previous record for most funds raised by a single candidate for the annual fundraiser, which supports Twin Cedars Youth and Family Services. Their goal was to raise $20,000. On Tuesday afternoon, Jackson announced on his Facebook page that they had raised a grand total of $22,552.

“This is officially the largest and the most that anyone has ever raised (for the Behind the Mask fundraiser),” Jackson said. “I think Tyler was just the perfect representative of not only Jackson Heating and Air but also Twin Cedars.”

Kia of LaGrange helped McCoy surpass his goal with a donation of $1,350 on Tuesday, and a wide variety of local businesses, including Dr. John W. Vollenweider’s Comprehensive Dentistry and Electrical Technicians Inc. All the funds raised by the Behind the Mask fundraiser will go toward Twin Cedars programs in Troup County, which is what these businesses and individual sponsors were supporting just as much as McCoy.

“It’s not just about buying cars,” said Todd Parrish, the general manager at Kia of LaGrange. “It is about getting involved in Twin Cedars and what they are all about.Kia of LaGrange tries to not only be involved in those type of activities, but everything in LaGrange because if you look at our tags they say ‘support your local economy.’ That is really what we try to do here at Kia of LaGrange.”

According to organizers, it fills an even more important role though, in that it raises awareness so that people in the community will know that there are programs to help and support local children.

“Ultimately, our goal is to not only raise money, but bring awareness to Twin Cedars,” Jackson said. “That is why this event is so fun because it does both, and it brings in the whole community. I’ve just been extremely appreciative of the way the community has responded to Tyler and the cause for Twin Cedars.”

The fundraiser is Twin Cedar’s biggest local fundraiser of the year, and the money raised spans the gap between grants and government funding and the needs of children in Troup County.

“I just want to thank the support of the LaGrange and Troup County Community,” said Lynne Taylor of Twin Cedars. “We couldn’t do the work we do without the community coming together. It is amazing what has happened, and this event has been successful every year because of the people in the community and because of the people who work for Twin Cedars.”

The total amount of money raised and this year’s King and Queen of Mask will be announced on Saturday at 7 p.m. at the Behind the Mask ball.

As of Tuesday, tickets for the ball at the Del’avant Event Center were going fast, but some were still available.

They can be purchased at Twincedars.org/behind-mask-tickettables-sales/ while supplies last.

For more information about Twin Cedars Youth and Family Services and how to donate or volunteer, visit Twincedars.org.