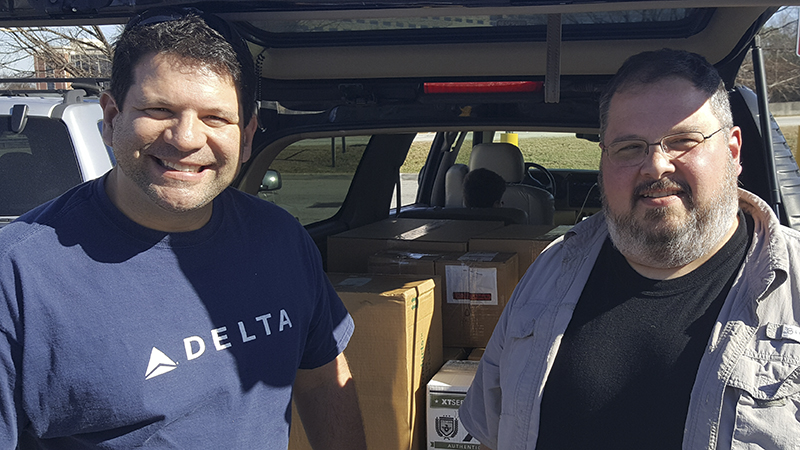 When Troup County Sheriff’s Office’s Officer Edward Burton heard that his coworker’s family was among those left without fresh water after Hurricane Maria destroyed a large part of Puerto Rico last year, he took it upon himself to collect and send water filters to the U.S. providence.

TCSO has been collecting Sawyer Mini Water Filters since October, and as of Tuesday, 260 filters had been collected for the residents of the island. According to Burton, 190 of those water filters were sent out on Sunday and will be delivered by a group known as the Flip Flop Flotilla.

“We started in October, and due to all the damage from the hurricanes, there were so many people without fresh water,” Burton said. “People were getting sick. People were dying, so I came up with the campaign and got permission from the sheriff to use the sheriff’s office as a drop off point either for people to mail stuff or to drop off.”

According to the manufacturer, the Sawyer filters that Burton has been helping to collect and send to Puerto Rico can filter up to 100,000 gallons apiece.

“People from all over the continental U.S., including Canada sent filters to me,” Burton said. “I had little old ladies who were on strict income allowances (give filters). I had one lady step up — I don’t know where she was from, but she heard the interview that I did on JoyFM — and she donated 100 filters herself.”

Burton said that he has been pleasantly surprised by how many people who have made a point of donating filters for the people of Puerto Rico.

“People stepped up,” Burton said. “It surprised me, but I’m doing what I can to help others because a lot of people don’t realize that they are citizens of the U.S. Just doing one small thing. The deputy here got in touch with his brother and his uncle for an address, and that is where this next shipment that I’m sending off will go to him.”

He also said that while a lot of repairs have been made in Puerto Rico since September, when Hurricane Maria made landfall on the island, there is still a lot of work that needs to be done, especially in the smaller islands that are part of Puerto Rico.

The sheriff’s office has supported Burton throughout the project.

“It certainly is a pleasure to help Ed (Burton) with a need to have one designated location for those to come to,” Sgt. Stewart Smith said. “He came to me and he came to the sheriff, and we certainly support him offering this location (at the sheriff’s office) for that.”

To follow the progress of the delivery of the water filters, visit the Flip Flop Flotilla on Facebook. To donate, drop off or mail Sawyer Mini Water Filters or a gift card for a retail that carries the filters to the Troup County Sheriff’s Office at 130 Sam Walker Drive.