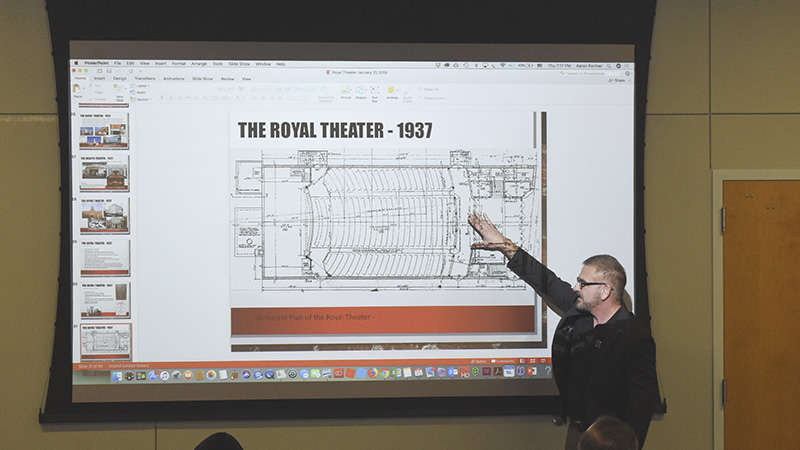 Architects from Carter Watkins Associates gave Hogansville residents a glimpse Thursday of what the future could look like at the historic Royal Theater and the city as a whole.

The theater currently houses Hogansville’s City Hall, but the city has explored whether it could move government offices elsewhere and restore the theater to its former glory. The architects unveiled floor maps of what it would look like during a Hogansville Downtown Master Plan Public Forum at the Hogansville Public Library.

The architects have not yet given an official recommendation to the city, but one is expected to come in the next few months. Joseph Owen Watkins and Ben Carter didn’t have time to talk financials during Thursday’s meeting, but their presentation did include a financials slide.

According to that presentation, which is available on the City of Hogansville website, the preliminary cost to renovate the theater for city hall will be $1,950,000. To restore and renovate the theater as a cultural center, it will cost around $1,263,150, plus a $750,000 Community Development Block Grant.

Two others options are also included. One is to take no action and to use the theater as it is currently constructed. However, the roof would need immediate replacement and the estimated cost is $250,000.

The fourth option is to lease or sell the building as is in its current state.

“They did so little damage to this theater when they put this in,” Carter said. “The sloped floor is still there. It was just all sort of built inside the theater … and they didn’t do a lot of damage.”

The new floor plan for the building that only includes the theater would involve a lot of work.

“We would have built new concrete retaining walls on all sides, inside and then pour the slabs,” Carter said. “You would eliminate the theater completely and the balcony would be removed completely. You’d basically end up with the four exterior walls and the roof.”

Carter said there’s no way to keep a second story to the building, unless it was in the front portion, but even then it would only be limited to a couple thousand square feet.

The proposed floor plan for the theater includes office space, a concession stand and large rows of seating. Carter said they did not get into all of the accessibility issues that might be involved.

“There’s a lot of things you could do differently,” he said.

David Burt, managing partner with Village Green, proposed creating Hummingbird Park, which would take the existing park on Main Street and expand it. Two structures would have to be moved or eliminated for that to become realistic, but Burt said it doesn’t have to happen overnight.

“Currently your park is sort of divided a little bit. You have a front triangle of the park in the pavilion and a parking lot in the middle. You have two homes that sit on one side of the park and you have the rest of the park that is [closer to City Hall]. What Hogansville downtown could use and really benefit from is an even better downtown park,” Burt said.

An expansion to the current Tower Trail was also proposed. An extended trail would include downtown and reach the Hogansville Memorial Library. Sticking with the Hummingbird theme, it was nicknamed the Hummingbird Trail.

A recommendation was also made for projects that can be completed in the next 10 months, which is the amount of time until the next Hummingbird Festival. The plan included closing Commerce Street on Market Days and adding live music, developing promotional materials for creating bird feeders, bird baths and other hummingbird themed items locals could create to add to the theme of the city and the creation of a hummingbird mural along Main Street or Commerce. The entire plan can be viewed online at www.cityofhogansville.org.