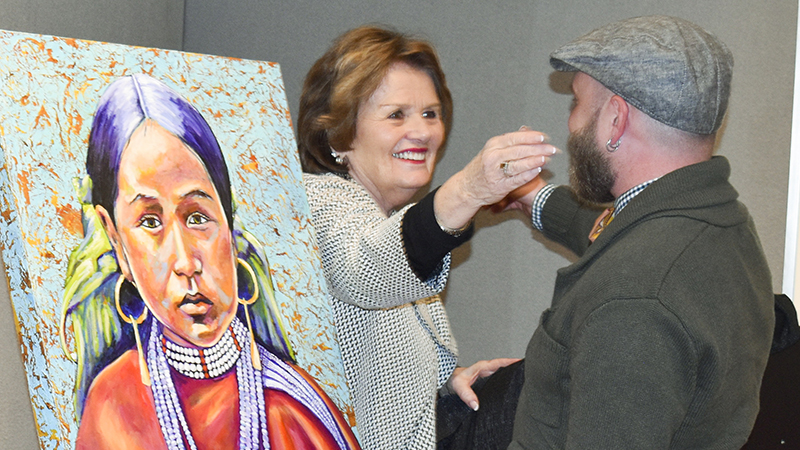 LaGrange Art Museum President Ethyl Ault thanks past LAM president Andy Porter for his service to the museum.--Alicia B. Hill

Jennings is a long-time resident of LaGrange who has been active in the community for decades. She first became involved at the art museum out of a desire to find a younger, more creative crowd to interact with and went onto become a board member for the LaGrange Art Museum.

“That conversation made me yearn for a hipper, more creative interaction,” said Laura Jennings, the new executive director of LAM.

“I knew that could be found at an art museum, so I signed up for a poetry writing class with a poet-in-residence at the Chattahoochee Valley Art Association. Thirty-six years later, and I can still satiate my need for cleverness right here, so this new position feels like a homecoming.”

At the meeting, Jennings expressed a desire to help the museum expand the use of artist workspaces, improve communication with the public and increase the frequency with which people encounter art in LaGrange outside of the museum.

“We are a community devoted to the arts, and we all know that, but when you drive through town, other than that mural that fell off the wall, you don’t have any sense that we are as committed to the arts as we are,” Jennings said. “Our rich performing arts — which we have a wealth of — dazzle audiences within four walls. The visual arts don’t have to be hemmed in that way.”

Jennings commended the existing outreach programs with local children, and she suggested the possibility of future temporary instillation art displays in the city or permanent sculptures at a future date that could serve as both art to beautify the city and make a statement.

“This museum should be a significant player and collaborator in the world of tourism,” Jennings said. “We know that tourism is economic development, and surely we can find corporate sponsors who can provide school bus transportation so that students can come downtown can see this museum, the Legacy Museum, have a tour of LSPA and see the architecture.”

According to those who have been involved with the museum for a long time, Jennings has been making a difference at the museum for years, so she was the ideal choice for the position of executive director.

“I watched a young woman who was a person on the board at that time (18 years ago) be able to take an organization and make people happy,” said Ethyl Ault, the president of LAM. “Times were hard.

There wasn’t that much money, but I’ve watched her work with the executive director of the museum at that time and give that person some ideas, and I started seeing change, and I said to myself, ‘there is a leader,’ and I am so glad, 18 years later that she is now our executive director.”

The LaGrange Art Museum has gone through several changes within the last year, including promoting Lauren Oliver to serve as the interim director. Oliver will now fill the role of deputy director at the museum.

“One of the best things that the board did in 2017 was promote Lauren Oliver to interim director,” said Andy Porter, a past president of LAM. “It was a joy to watch Lauren grow in this role and run the museum flawlessly.”

Last year was also big for LAM in that it received a bronze award from the Southeastern Museums Conference for “In the Land of Pasaquan: The Story of Eddie Owens Martin.” The exhibit was composed and first displayed in LaGrange and is currently on display at the Intuit Museum in Chicago, Illinois.

LAM’s next exhibition will be the Second LaGrange Southeast Regional, which will open on Feb. 16. For more information on LAM or upcoming exhibits, visit Lagrangeartmuseum.org.