As Hogansville considers the future of the Royal Theater, many locals remember its heyday 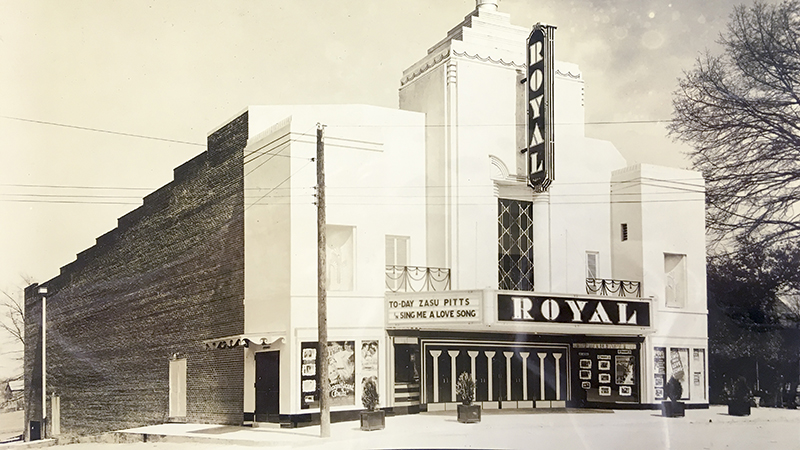 The Royal Theater is shown in an early photo, likely soon after it opened in 1937. Zasu Pitts’ Sing Me a Love Song is shown on the marquee. It premiered on Dec. 25, 1936 and was released by Warner Brothers Jan. 9, 1937. --Contributed Photo

HOGANSVILLE – Last week, the City of Hogansville held a forum to discuss the future of downtown Hogansville, but as the city council and residents consider adding features to spruce up downtown, the future of historically significant features like the Royal Theater will also require consideration.

According to information shared at the public forum last week, the two primary options for the Royal Theater are to renovate it to become a fully functional city hall or renovate it to return it into a theater once again. Not renovating the building at all could have potentially disastrous effects, so that “option” is not being seriously considered, according to several city leaders. Both renovation options will require a significant investment in the historic building, and ultimately the council will have to decide what to do with the 81-year-old landmark while balancing the city’s finances and a desire to preserve Hogansville’s history.

The Royal Theater was first mentioned in the LaGrange Daily News on Oct. 15, 1936. The initial article on the new theater offered only the basics, but later articles would describe the theater more thoroughly. The initial announcement read:

“Work began this week on construction of Hogansville’s projected Royal Theater, with James F. Pent the engineer in charge. The building is to have a capacity of 900 seats, with two balconies, and will be under the management of W.E. Griffin and the Lam Amusement company. Expected cost was not announced.”

The theater opened in 1937, and it was added to the National Register of Historic Places in 2001. The registry lists Lam Amusement Company as the original owner of the Art Deco building.

“We did find out that it was built by a local O.C. Lam and his brother C.O., (who) was the school board superintendent, so it was nice that it was a local company, and you didn’t have one of the big movie theatre companies coming in here,” said Joe Watkins, one of the architects with Carter Watkins Associates who are creating plans to show the city its options for the theater.

“The neat thing about your theater is that it wasn’t built then retrofitted as a theater. It was actually built as a theater, so that makes it different than most theaters that you see in downtowns.”

The theater served as one of the primary sources of entertainment in Hogansville during the city’s manufacturing boom, when citizens would often walk to the theater from their mill village homes.

“I was born here in Hogansville, and the town used to be wide open on Saturdays. Every parking place was full,” said Terry Searels, who remembers coming to the theater in the 1950s. “We came up here on Saturday and stayed all day for a dime. Popcorn was a nickel. Coke was a nickel. Then we had a nickel to put on a pack of cigarettes.”

The Royal Theater remained a staple of Saturday entertainment — especially for Hogansville’s youth — for decades.

“Back then you didn’t have video games and all of the other distractions in the world,” said Clay Bryant, who worked in the theater in 1973. “If you wanted to do something, you went to the show, and I watched about every Elvis Presley movie when I was a kid there. It was a great time.”

By that time, attending a movie cost a bit more than it had in the 1950s though it still only cost a fraction of what it often costs to see one now.

“You would go there, and back then it probably wasn’t but 50 cents to get into a movie,” Bryant said. “You spent your Saturday at matinees there.”

The theatre eventually closed down, and in December 1981, the theater was presented to the City of Hogansville by Ralph Howard, Sr. and Ralph Matthews. The possibility of transforming the then 700 seat theater into a gospel oprey was suggested around that time. However by August 1983, the city was discussing turning the theater into city hall, and the Hogansville City Council approved the renovations in a 3-2 vote in May 1984.

The Royal Theater became the home of city hall in December of that year, according to articles in the LaGrange Daily News.

“They ran out of space at the old city hall,” Mayor Bill Stankiewicz said. “It was the police station, the jail and the city hall. … So, the theater had closed and the owners of the theater donated it to the city, and they did a makeshift renovation and put in city council chambers and some offices.”

Now, residents of Hogansville regularly share their experiences at the theater with city staff while coming in to pay their utility bill or take care of other city business.

Those stories serve as an interesting highlight for the city staff who work there.

“It is just cool how people flock to this entity that brings them back to their childhood,” said Lisa Kelly, a Hogansville native and city clerk.

During the renovation to city hall in 1984, many of the original sections of the theater were only changed just enough to make the building functional as city hall, and the current city council chambers sits in what was formerly the rear rows of the theater. Besides the need for general updates for structural reasons, one of the primary concerns for the building’s use as city hall is that it is not handicapped accessible and does not comply with the Americans with Disabilities Act. Any renovations to the building would have to bring those areas up to standard while ensuring that the 81-year-old building is structurally sound.

Even after the public forum last week, councilmembers have mixed feelings on what the future of the building should be. Several locals have spoken in favor of restoring the Royal Theater to its former glory and relocating city hall to somewhere that could easily be made to meet ADA stadards.

“It’s served its purpose well,” Stankiewicz said. “For (more than) 30 years now, it has served as city hall in all that time, but we are out of space. We need to improve it or move, and it seems to me that when thinking about city hall those are the only alternatives that we have.”

However, there are also concerns for the cost of renovating the building while purchasing a new city hall location would have negative financial implications for the City of Hogansville’s budget.

“The city is not really prepared to try to separate the historical theater from city hall as far as money,” Councilmember Reginald Jackson said. “… I think right now we are really going to be discussing this in the near future. We had that forum to discuss what the citizens wanted, and then we are going to look at the figures and things and have a good game plan.”

The future of the Royal Theater will no doubt be a major topic of conversation for weeks to come on the council, as councilmembers use local input to decide what will be best for the future of the theater and Hogansville as a whole.