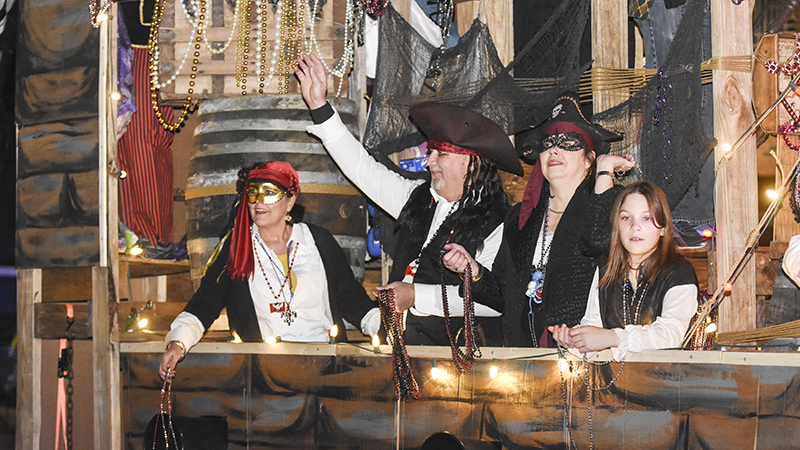 LaGrange’s second annual Mardi Gras Parade marched through downtown on Saturday, scattering coins, beads and other prizes for pedestrians lined up along the street.

This is the second year that the parade has been organized in LaGrange by Ken Gordon and John Cashen, who both relocated to the city from New Orleans in 2005 after Hurricane Katrina destroyed the city. Despite the pair’s love for LaGrange, they missed the traditions of their former home, and decided to work together to bring some of the excitement of New Orleans’ best known event to LaGrange with their organization, the Krewe of Mask.

Like any Mardi Gras parade, LaGrange’s celebration featured local Mardi Gras royalty both from the Krewe of Mask and Twin Cedar’s Behind the Mask fundraiser, which ended last week. The Krewe’s king and queen of the parade were local entrepreneurs Neil and Trish Liechty.

“I’m glad we’re bringing this tradition to LaGrange. We can enjoy this event with our families. It’s unique and fun, and it’s never been done here before,” Trish Liechty said in a press release.

Neil Liechty was also excited about the parade and the honor.

“It’s a real honor for me. I’ve never experienced anything like this. I really feel privileged.” Neil Liechty said, in a press release.

Sue Olson, the City of LaGrange’s executive assistant, served as the parade’s grand marshal to honor all the hard work that she does for the city behind the scenes.

“When they told me I was going to be the Grand Marshal, I was shocked,” Olson said. “I love my job helping the community and to be recognized for my hard work and 23 years with the city — it’s quite an honor.”

Vets to be honored with ‘Songs that Won the…