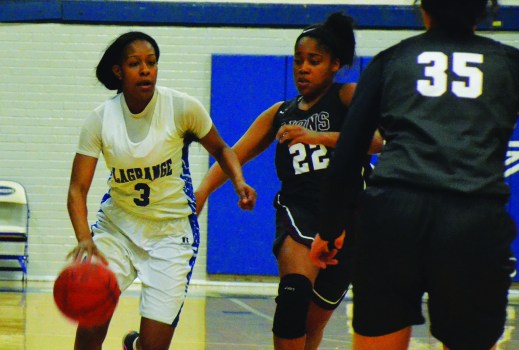 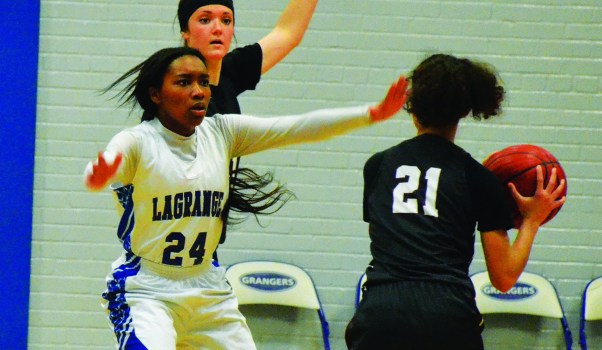 It’s the same two teams, the same location, and the same high stakes.

A year ago, it was the LaGrange Lady Grangers hosting Sandy Creek in the Region 5-AAAA championship game.

Sandy Creek was the number one seed, and it beat LaGrange 62-45 to win the region title.

Today, LaGrange’s gymnasium will once again be the site of the girls’ championship game, and it will be the Lady Grangers and Lady Patriots meeting for a second consecutive year.

This time, LaGrange is the number one seed and the favorite, while Sandy Creek comes in as the second seed.

LaGrange won both regular-season meetings against Sandy Creek, and it has won all 13 of its games against region opponents this season.

On Thursday, LaGrange earned its spot in the championship game with a 45-21 victory over an over-matched Central-Carroll team.

Sandy Creek held on late to beat Troup 46-44 on Thursday to earn a chance to win a repeat title.

“I told them downstairs, last year the way I felt was we had to play a perfect game to win,” LaGrange head coach Stephen Tuck said. “This year, we’re supposed to win. It’s all up to y’all.”

Since the calendar changed to 2018, LaGrange has been unbeatable.

The Lady Grangers rolled through their region opponents with a 12-0 record during the regular season to secure the top seed and earn a bye into the semifinals.

It had been a week since the Lady Grangers played, but they didn’t show much rust in the first half as they cruised to a 29-13 lead.

The Lady Grangers struggled a bit offensively early in the second half, but they finished strong to win by 24 points.

“Initially I thought in the first quarter we came out really good, really hot,” Tuck said. “I looked at my assistant coach around the third quarter and said it looks like we haven’t played for a week. And it is what it is. But the thing is, when you play defense the way we played defense, that’s the difference. You keep putting pressure on, and the offense finally woke up. We finally settled in.”

Even though LaGrange had the game in hand in the fourth quarter, Tuck wanted to make sure the key players got plenty of court time to knock off the rust.

“I think I played my starters until about two minutes to go in the fourth quarter, simply because of that,” Tuck said. “It’s a gift and a curse having a bye for that long, but I think it was good.”

Aryan Dozier and Chnaireia Strozier, LaGrange’s outstanding senior guards, helped LaGrange get off to a quick start by combining for 18 points in the first half.

Junior guard Blair Herrod got some good looks late, and she made two 3-pointers to score six points.

While Dozier and Strozier are consistently LaGrange’s leading scorers, Herrod also has the ability to get hot and score in bunches, and Tuck believes she’ll be a key going forward.

“At the beginning of the year, she had four (3-pointers) in one game, and then she had three in a couple of games,” Tuck said. “Then what happened was she floated in and out of the offense. And she kind of got down on herself. These last couple of games, she’s been really, really solid. I let her know, you’re a key part of this team. You’re a captain of this team. I told her you’re a captain of this team number one because I know how much you’re going to mean to next year’s team. This is your team next year. And two, your ability to play really well.”

Tuck added that “I think it’s really good for her confidence, just to see her shots go in.”

If LaGrange wins today, it will be guaranteed two home games in the state tournament, and it could possibly host a third game before the tournament moves to a neutral site.