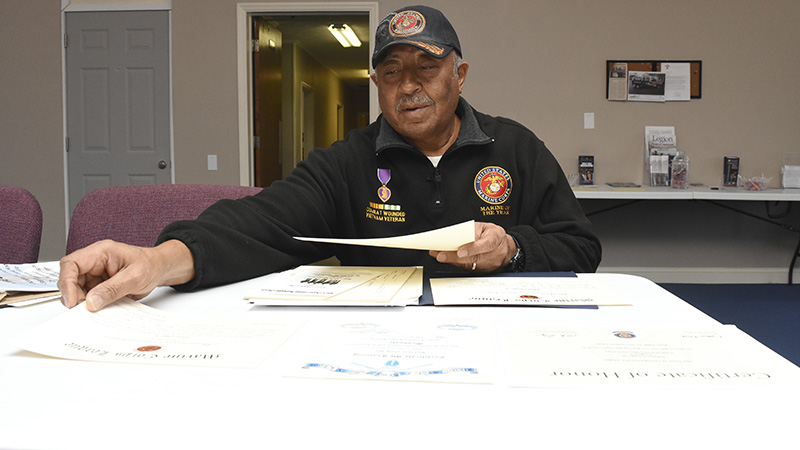 Johnny Griggs goes through some of the honors and awards he’s received over the years. --Daniel Evans

On Thursday, Vietnam War veteran Johnny Griggs Jr. will celebrate his 70th birthday and his 45th wedding anniversary, but neither would’ve been possible without a little bit of spiritual intuition.

In 1966, Griggs was an 18-year-old U.S. Marine in the midst of the Vietnam War, and nearly lost his life when a landmine exploded. He can still remember it to this day. Something told him he needed to move from one side of the military vehicle he was riding in, so he quickly moved to the other side.

Not long after, he was laying on the ground with a shattered ankle, but most importantly, he was still alive. Several others weren’t as lucky.

“When I got wounded, we were going down the back road, and we were on the back of a [vehicle]. A voice spoke to me and said ‘move,’” Griggs said. “By the time I got up and moved from this side to the [other side], that’s where the landmine was. If I hadn’t moved, I might not be here today. I might have gotten wounded worse than I did today.”

Griggs was taken to a hospital in Da Nang, Vietnam, where he was treated for his injuries. He thought he’d get to go home, but instead he was sent back out with his unit.

“They said they were short of men,” he said. “Usually when you get wounded, you get sent home but they sent me down to Da Nang in the hospital down there. Then, after that, they sent back up to my unit.”

Griggs ended up serving in Vietnam for 13 months. He spent time taking ammunition to the men in the field, but when he recovered he returned to normal duty.

When his time in Vietnam finally ended — right in the midst of the 20-year war — his plane was shot out as it left.

“When the plane came in, the Viet Cong was waiting in the bushes on the side of the tree line,” Griggs said. “We had our duffle bags so when the plane landed, it turned around. That’s when they started firing. We had to leave our duffle bags on the airstrip, so we could get out of there.”

When he got back home, Griggs decided not to re-enlist. He was given the option to leave after 3.5 years, and he elected to be discharged instead of going back to Vietnam.

“When I got ready to re-enlist, they told me I was going back to Vietnam,” Griggs said. “I didn’t want to take that chance, so I got out.”

Griggs returned and started working for a company that made coils for small motors, and he also served in the Alabama National Guard for 23 years.

He’s now retired, but he stays busy as an active member of the American Legion, Marine Corps League, the Veteran of Foreign Wars and many other organizations.

He received a Purple Heart for his service in the war and was named Troup County’s Veteran of the Year in 2017. He’s also received a Navy Commendation Medal, Combat Action Ribbon, Army Good Conduct Medal, among many, many others.

Last year, he was nominated for the Military Veterans Hall of Fame in Atlanta.

“It makes me feel that I’m doing something good for the community and for veterans,” Griggs said.

He and his wife Teresa have three children — Tamika Huguley, Monica Brown and Jermaine Griggs.