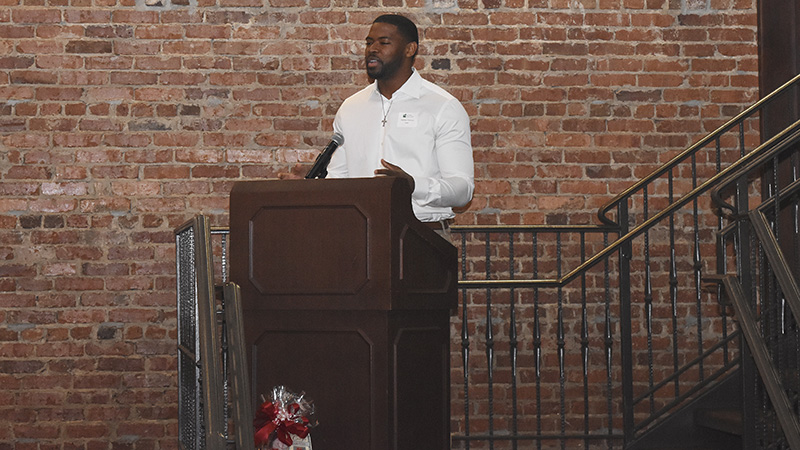 Freeman played four years of football at Georgia Tech and is now chasing his NFL dream, but he took a few minutes Tuesday to talk about growing up in Troup County. He is the oldest of four siblings, including one adopted brother that greatly impacted how he looks at the world.

One of KeShun’s brothers, Landon, had to wear a heart monitor at a young age and often had moments where he required immediate care. One day Keshun and Landon were sitting while his parents were finishing up something, and Landon stopped breathing.

Even as a young child, Keshun didn’t panic.

It wasn’t helping. Freeman reacted quickly, pulling his brother out of his car seat and running franticly to his parents.

One of his family members started performing CPR and after a short time later Landon started breathing.

“It was really hard for me at 11 or 12 years old to see a child not breathing,” Freeman said.

That was a moment that has stuck with him throughout his life. Not only is it a reminder that bad things can happen, but it seemed to make him appreciate the good times more.

Freeman said when things are tough, he always reminds family members, teammates and friends to think about a happy time in their life.

“Think about those moments where you had a really happy time and think about how bad you want to go back to those really happy times,” Freeman said. “You don’t want to settle for being low because when you’re low, that means you don’t feel like you can grow.”

When he’s on the field, he thinks about all of the people who don’t have the opportunity to play football or even to get out of bed. He studied business administration but his childhood with Landon is part of the reason he aspires to be a pre-medicine student.

“Every moment that I am on the field I think about children in hospitals who are sitting up and so sad because they can’t get out of the bed,” Freeman said. “Every moment that I’m on the field I have to realize that I am going to give these kids my arms and my legs. I’m going to step and make this tackle that can’t step and can’t make that tackle.”

Pete Wiggins, Callaway High School head football coach, said Freeman was a difference maker and the kind of player ever coach would love to have on their team.

“What separates good players and good people is what’s beating in your chest, and he has that,” Wiggins said. “He has that ability to motivate and lead those around him. It’s a humbleness that he wants those around him to be better.”

Freeman finished his Georgia Tech career with 98 solo tackles and 159 total tackles. He also had seven sacks, two forced fumbles and two fumble recoveries. He was a four-year starter for the Yellow Jackets.

The Early Bird Breakfast is hosted once a month by the LaGrange-Troup County Chamber of Commerce.