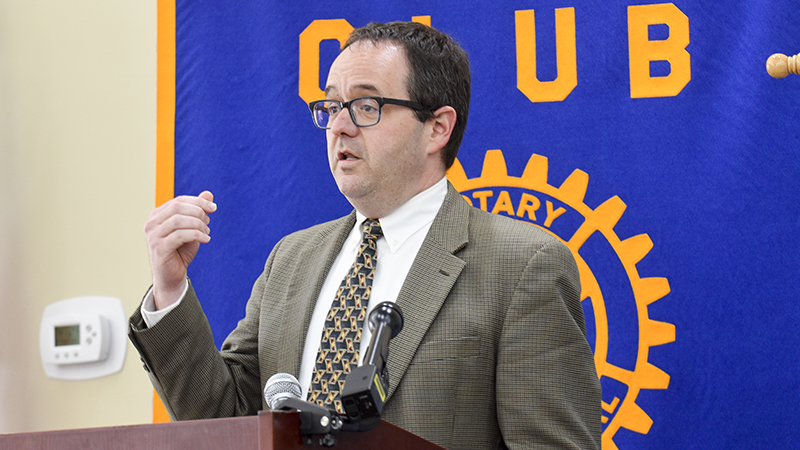 LaGrange Mayor Jim Thornton updated the Rotary Club on the state of the city on Wednesday during the club’s regular meeting.

Booklets were given to everyone in attendance listing the city’s accomplishments in 2017. Among the highlights were the grand openings of Wild Leap Brew Co., The Courtyard by Marriott and Sweetland on Ice as well as the new downtown parking deck. The outlines for upcoming projects for everything from the skate plaza to a dog park to storm water initiatives were also covered in the booklet. However, Thornton’s speech focused primarily on the themes of progress and intergovernmental cooperation.

“I think that it is a very good time to live in LaGrange,” Thornton said. “There are a lot of exciting things happening in our city, in our county, in our neighboring cities, really in our region of West Georgia and East Alabama. There is a lot of energy in our community.”

Thornton discussed the importance of encouraging growth and facing the problems that come with that growth.

“We are growing, and as a community, we have decided to embrace the growth and to deal straightforward with problems and issues that growth will inevitably produce, rather than rejecting growth as some communities do and end out stuck in a rut for decades,” Thornton said.

Thornton welcomed the two newest members of the LaGrange City Council — Jim Arrington and Nathan Gaskin — and said that he is glad to have a council that has had a 50 percent turnover in the last two years — including council member Mark Mitchell’s election two years ago — since that means new energy and new ideas for how to improve the city.

“I’m not someone who thinks politicians should be unopposed,” Thornton said. “I think every politician should have opposition from time to time because I think it is part of our process. I enjoyed the reelection campaign, and I think both myself and my opponent had a very positive message, a very forward-looking message about our community, a very exciting message embracing this growth and trying to figure out how we can improve people’s lives.”

Thornton also emphasized the role of teamwork between local cities and the county.

“We (on the city council) disagree sometimes, but we do it in respectful ways, and I can tell you that all of them are men of good faith who are concerned about the future of this community and working closely to improve it,” Thornton said.

“Also, I again wanted to acknowledge (Troup County Board of Commissioners) Chairman (Patrick) Crews, (Hogansville) Mayor (Bill) Stankiewicz, (West Point) Mayor (Steve) Tramell because the issues that we face as a community and the opportunities that we have go far beyond the city limits that line LaGrange. It is a regional approach that we have to take, and I can tell you that we all work well together. We don’t always agree on everything, but I think we are all pulling in the same direction.”

This is the fifth time that Thornton has presented a state of the city address to Rotary.

Rotary meets at Highland Country Club on Wednesdays at noon.