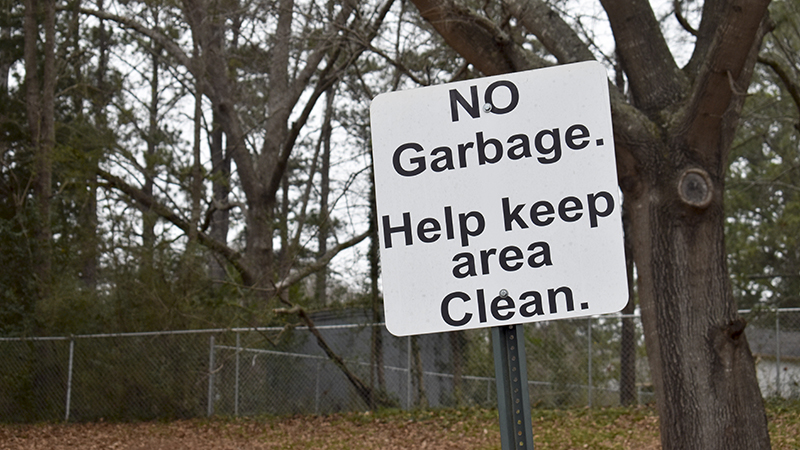 The City of LaGrange and Troup County are planning to step up efforts to cleanup the community through education and enforcement. --Alicia B. Hill

This week, local conversation has repeatedly turned to roadside litter as local leaders search for a long-term solution to Troup’s trash trouble.

Representatives from Troup County and the City of LaGrange met with other local leaders last week to discuss possible ways to get rid of roadside litter. This week, they began working together on their plan, which focuses on community education, community pride and taking their own leadership roles from council and commission chambers to the roads of the communities they represent.

“There has been a lot of discussion — it started out on Facebook and moved into the newspaper — about litter in Troup County,” LaGrange Mayor Jim Thornton said on Tuesday. “I think that originally some of the worst areas and complaints were in the unincorporated area, and (now) we are hearing a lot about it in the city as well.”

Officials across the board acknowledged that the most sustainable solutions most likely won’t be easy or come about overnight.

The Troup County Board of Commissioners has faced the brunt of the blame for the litter in the county due to the decreased number of inmates picking up litter following the closure of the Troup County Correctional Institute in June 2017.

Members of the county commission have said that they believed that closing the facility was their best option when facing increasing cost of running it without increased funding would have prevented county employees ranging from deputies at the sheriff’s office to court clerks from receiving competitive salaries.

“Prisoners cost money,” Crews said. “They’re not free. There is a cost associated with that. What we’ve got to do is go after the people creating the trash, and as (County Manager) Tod (Tentler) said, we can get somebody to do it. We can hire a private group that would cost $63,000.”

Tentler estimated that a prison detail costs $65,000 a year, including benefits, but not including other associated costs, like the actual operational cost of the correctional institute.

The commissioners are hopeful that they can put tax dollars that would go to a contractor to better use by encouraging citizens to take ownership of their neighborhoods and their litter. Both the city and county hope to encourage that community ownership mindset by setting a positive example.

���The (city) crew went out (on Pegasus Parkway) for a whole week and picked up a 40-yard dumpster container of litter that was on the side of the road,” City Manager Meg Kelsey said.

The possibility of city council members adopting sections of road to personally keep clean was suggested in the LaGrange City Council work session on Tuesday, though no official decision was reached.

Council members aren’t the only ones considering adopting sections of road either. On Thursday, the Troup County Sheriff’s Office announced during the commission work session plans to adopt a mile of road for the office to keep clean in partnership with its Explorers group. Additionally, the Troup County Board of Commissioners discussed the possibility of cleaning up sections of road as a group.

“It involves us as individual citizens picking up trash,” Crews said. “It involves judicial (sections of) getting both law enforcement and our judges to impose fines when we catch people littering. I do believe that it is going to take us getting to the root cause, and that is the individuals.”

Officials hope that local civic clubs and businesses will likewise commit to adopting a section of road either unofficially or through Keep Troup Beautiful’s Adopt a Spot program.

The Troup County Sheriff’s Office was up to two crews picking up trash as of Thursday, and while the office has said that the county crews work harder than state crews. They still have over 200 fewer inmates at their disposal than were available last year.

Anyone looking to join a service project or make a long-term commitment can join the Great American cleanup beginning in March and ending on Earth Day, which is April 22. Keep Troup Beautiful sponsors the local portion of that cleanup.

“Every year, the Great American Cleanup happens, and because we are affiliated with Keep America Beautiful and Keep Georgia Beautiful, we get support from the national and the state organizations on that,” said Scott Landa of Keep Troup Beautiful.

The role of city and county employees in preventing litter was also discussed at the city work session, and solutions like encouraging trash vehicles to double check closures, improved code enforcement and employees cleaning litter in areas where they are already doing other work were discussed.

“When a problem surfaces, we try to come up with a solution to make it better, and it (litter) is a multifaceted problem because it involves some cleanup,” Thornton said. “It involves some self-policing of city and county crews and trucks. It involves a lot of education for our citizens both about the need to not litter and then to clean up the litter.”

The City of LaGrange and Troup County have already filmed a commercial together on tackling litter that can be viewed on the city’s Facebook page @lagrangegagov.