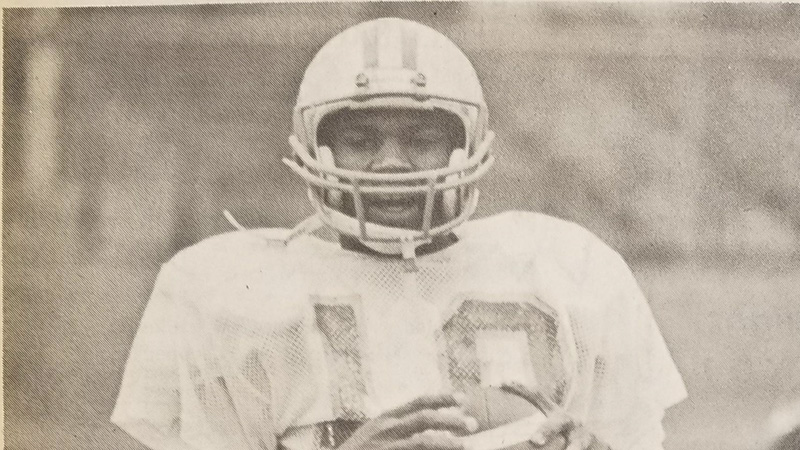 The fall of 1983 was a special time for the LaGrange High football family, and Vince Sutton was a primary reason why.

Sutton was a special player, and during that memorable 1983 season, he established himself as one of the all-time greats from a proud program that has produced so many legends.

Sutton was a quarterback for that team 25 years ago, and he guided the Grangers to a 14-1 record and a spot in the Class AAAA state-championship game against Tift County.

Sutton earned just about every honor he could, and most notably he was named a USA Today All-American player.

Sutton dazzled with his ability to sling the ball downfield with power and accuracy, or use his legs to leave opposing defenders looking helpless.

Yet as extraordinarily gifted as Sutton was, long-time LaGrange coach David Traylor recalls a player who was just one of the guys.

“Sometimes kids can be where they’re so gifted athletically, and they know it, and they’re not the best teammate,” said Traylor, who coached the offensive line in 1983.

“Vince was a wonderful teammate. He enjoyed being with his teammates. They hung out together, and he was just Vince. He knew he had a special gift, a special talent, but he wasn’t a prima donna by any means.”

In recent years, Sutton had fought major health issues, and he died on Thursday.

He leaves behind a loving family, including his four sons, as well as friends who have been with him through good times and bad.

One of those friends is Albert Jackson, who was a freshman at LaGrange High when Sutton was a senior.

Jackson was the athletics director, and he hired his former teammate to take over the school’s football program, and that proved to be a wise move.

Under Sutton’s guidance, Dawson Street won multiple state championships, but more importantly to Jackson, he proved to be an unwavering and committed supporter of the men who were on those football teams.

“He helped a lot of kids that needed second chances, or it just didn’t work for them at LaGrange, Troup or Callaway,” Jackson said. “He was able to help a lot of kids get to college who thought they’d never have a chance to go to college.”

During his time wearing the Granger blue, Sutton was an artist with a football, and Callaway Stadium was his stage.

Sutton was a true dual-threat quarterback who combined for more than 3,000 yards on the ground and through the air.

“He was a special talent, and he was a lot of fun,” Traylor said. “He brought a lot of joy to the Granger Nation by using his abilities to win a lot of football games here.”

The Grangers went 10-2 in the 1981 and 1982 seasons, and a year later they reached the doorstep of a championship in the state’s largest classification.

LaGrange went 14-1, with its lone loss coming to Tift County in the championship game.

In the quarterfinals of the state playoffs, Sutton threw for more than 300 yards and four touchdowns as LaGrange beat top-ranked and unbeaten Clark Central 28-20.

Amazingly, Sutton didn’t even practice in the days leading up to that game because of a sprained ankle he suffered the previous week.

“I just remember it being a fun time,” Traylor said. “We had a great group of kids, and they all held each other accountable. We had Nate Hill, we had some good leaders, and it was just real good chemistry. They all worked together well, and (Sutton) loved doing things with his teammates.”

LaGrange’s head coach in 1983 was Danny Cronic, and in a 2011 story in The Birmingham News, he shared his thoughts on his gifted quarterback.

“I think he threw 400 passes and had two intercepted as a senior,” Cronic said. “I might be a little off on the 400 passes, but not the two interceptions. He was a fabulous football player, an unbelievable passer and a pretty good runner, too.”

Cronic added that “he had great vision. He could almost see a room without going in there. A lot of that was anticipation. He had a lot of field awareness. He was very special.”

Sutton, predictably, was pursued by some of the country’s most prestigious programs, and he decided that Tuscaloosa was the place for him.

While Sutton was primarily a backup during his time at Alabama, he did make an impact.

Most notably, Sutton started a handful of games in his first season at Alabama, and no other freshman quarterback at the school did that until 2016, when Jalen Hurts led the team to the national-championship game.

Sutton was thrust into the lineup by week three, and he started games against Southwest Louisiana, Vanderbilt, Georgia, Penn State and Tennessee.

While Sutton was mostly a reserve player after that 1984 season, he did have one moment of glory as a senior in 1988 when he came off the bench and led Alabama to a come-from-behind win over Kentucky.

With his team trailing 17-0, Sutton entered the game in the second half, and he guided Alabama to a dramatic 31-27 win.

Following his playing days, Sutton returned to his hometown and worked for the Troup County Sheriff’s Department for a dozen years.

When Dawson Street Christian School announced that it was beginning a football program, Sutton expressed an interest, and the job was his.

For Cronic, the move made sense.

“He was good with kids as a mentor,” Cronic said. “Vince had a very high aptitude for football. He knew everything I knew when he graduated from high school.”

The partnership between Sutton and Dawson Street Christian School proved to a profitable one in so many ways.

On the field, the Wildcats were an unstoppable force during the early years.

“We went four years in eight-man (football), and I think we only lost one game, and we won three state championships,” Jackson said.

As Sutton’s health began to deteriorate, as his kidneys failed, he was unable to remain the head coach.

“He didn’t coach for about three years,” Jackson said.

“When he was feeling good, he might come out and volunteer and help. When we moved to Newnan that first year, he came to me and said I’m feeling better and I want to coach again.”

While Sutton’s health may have improved, it was still a struggle for him, but he was always there for the players who meant so much to him.

“He had to go to dialysis three days a week, but he would still come to practice,” Jackson said. “He never missed a game. Like I told the kids, if you give him that same commitment he gave to you, you can do anything.”

The impact Sutton made in that final season as head coach was felt not just in the number of wins the teams accumulated, but in the players whose futures he impacted in a positive way.

“That year, I think we had four kids end up going to college, a lot of them because of the training, and the work habits that he taught them,” Jackson said. “Vince was just a real good guy.”

Bubba Jeter, a Troup High graduate who later had two successful stints as the school’s head coach, remembers getting to know Sutton as well as Nate Hill during his younger days.

Hill, another former Granger great who died in 2007, was the top defensive player on that 1983 team and he went on to play at Auburn for four seasons.

“I worked with Vince and Nate Hill at Troup County Parks and Recreation when I was in college, and they were in high school,” Jeter said.

“We rode to work together in the summer in my Jeep. Vince was a great athlete and a great, great person. He is a true LaGrange, Georgia legend. Rest in peace my good friend.”

Jeff Hollis, who played football at LaGrange in the early 80s, said Sutton was an important and valuable part of his life.

“All of my memories as a young athlete, from childhood through high school include memories of Vince,” Hollis said. “We grew up with each other in recreation-league sports, mainly baseball, and then as classmates and teammates at LaGrange. He was so talented. I had never seen anyone that could throw a baseball or football as far as Vince could, and he did it with such ease. He had charisma, and a million-dollar smile to go with it. He was always smiling and laughing and was such a gentleman. That’s what I remember the most about Vince. Through the years we were sometimes teammates, sometimes opponents, but we were always friends.”

OF NOTE: To read more reaction to Sutton’s life and legacy, go to Facebook.com/LDNSports