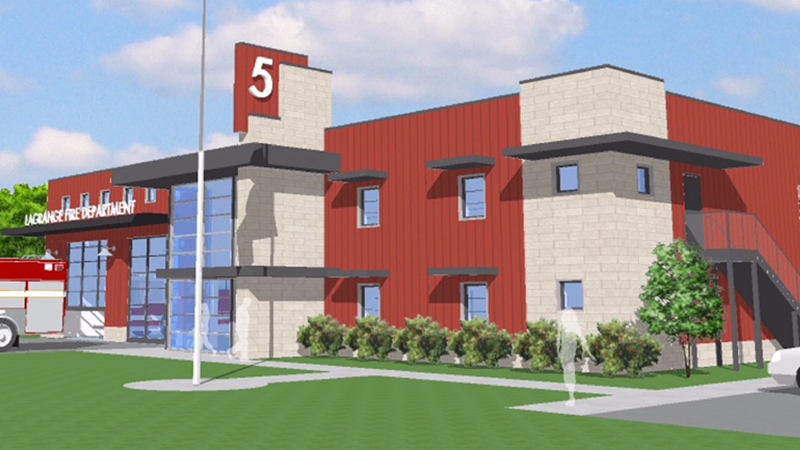 The designs for the Lagrange Fire Department’s Burn Building and LaGrange fire station five were released on Tuesday. --Contributed

On Tuesday, the LaGrange Fire Department discussed some of the details of the new fire house and burn building that are on track to be built this year using money from the Special Purpose Local Option Sales Tax.

The new station is designed to hold a fire engine, a command unit in the bays and will include office space, bedrooms, a dayroom and a kitchen for the firefighters. The design for the station shows a similar exterior to WellStar West Georgia’s addition, which will be across the street from the new fire station.

“It looks very similar to the hospital in some of the lines,” Mayor Jim Thornton said.

The land where fire station five is set to be located was originally owned by WellStar West Georgia, but due to a land swap, the city did not have to spend any of the project’s funding on the land itself.

“The land was owned by the hospital,” City Manager Meg Kelsey said. “We originally approached the Callaway Foundation about a parcel that was adjacent, but it didn’t meet our ISO requirements.The Callaway Foundation was willing to give us that property, so we worked it out where we swapped that property. The hospital got the Callaway property, and we got the hospital property. It didn’t cost us anything, other than some nominal legal bills to get it done. We are really pleased with that.”

The design for the LaGrange Fire Department’s new burn building was also released on Tuesday. The new facility will replace the current burn building that Dekmar said has become worn over time due to all of the training that takes place there.

The new facility will be larger than the one currently in use but will take advantage of similar construction methods.

“We will actually have 11 burn rooms inside the training center, and it is kind of set up like a residential structure, residential house,” LFD Deputy Chief John Brant said. “That will give us a better opportunity to train. Right now, we’ve got two Conex boxes that are on top of one another, and it’s a straight shot inside, and we’ve got three burn rooms. Having 11 burn rooms will also help with the lifespan of the structure. We will also have on the third and fourth floors, search and rescue areas and confined space (training).”

It was unclear as of the LaGrange City Council meeting on Tuesday when construction would actually begin on either project.