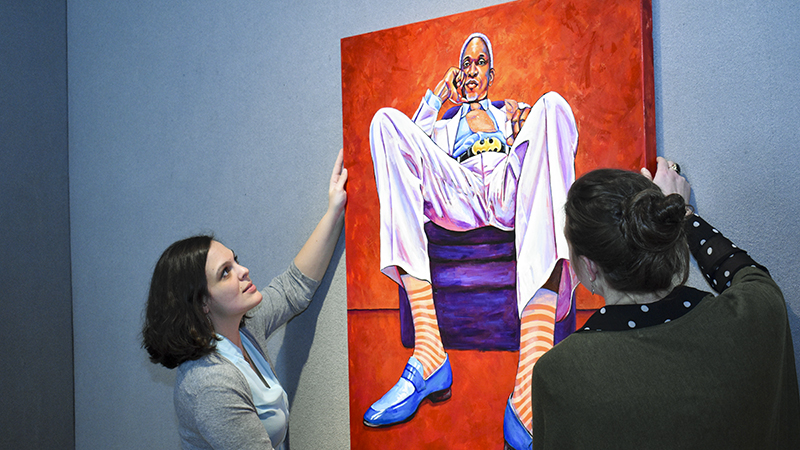 The show features the top works selected by a jury from submitted by 180 artists from 12 states.

“There were over 600 entries, and 121 works were selected,” said Lauren Oliver, LAM deputy director. “…It is really selecting artwork that has a higher standard or meets excellence goals.”

Everything from ceramics to oil paint are used to portray a variety of subjects leave little doubt that regardless of personal taste, the exhibit will have a bit of something for everyone who visits.

“In reviewing the almost 600 entries, I found an engrained respect for longstanding art making traditions, innovative approaches to a range of subjects and media, as well as open-ended experimentation in a variety of materials,” said David Houston, a competition judge in a statement. “Some of the works herein harken back to modernist ideals, while others draw from a wide range of representational devices, craft traditions and contemporary digital realities.”

Artists in this particular competition receive awards based on if their work sells in addition to standard awards.

“The real reason that we do this is to provide citizens of the community with access to current artistic practice, and to provide exhibition opportunities, purchase opportunities for artists,” Oliver said. “For their work to be included in a museum’s permanent collection.”

Several locally known artists including Thea McElvy, Henry Jacobs, Steve Griffin, Jeanine Bradford, Clint Robinson and R.S. Robinson will have work featured in the exhibit alongside works by talented artists from throughout the region.

“It puts the museum in a broader art range, not only locally, but in the south,” Oliver said. “We have artists from Tennessee and different states that are in the exhibition. Works were sent to us from 12 different states, so it really opens it up to be able to see what other artists are doing. And all the artwork submitted is available for purchase, so it gives artists an opportunity to sell their work and for people to recognize their names and for some people to travel here.”

“(I enjoy) just the variety of work you get,” Oliver said. “It is all different mediums, and you see a new variety each year, and then you see something new that is brand new. You haven’t seen it before, and that is what is so exciting.”

The competition is biennial, so when its doors close in April, the next in the series will not take place for another two years. If it goes as well as the previous competition though, residents can look forward to seeing another show like this again in the future.

“The first year was great,” Oliver said. “We had a great response from artists, and we decided to partner again with the college. We used to do something called the LaGrange National, and it is basically the same concept, except we just focused on southern artists.”

The Second LaGrange Southeast Regional was funded by the Georgia Council for the Arts and the Callaway Foundation. The opening reception was funded by Dr. John Jackson Jr., Dr. John Jackson III and Comprehensive Esthetic Restorative Dentistry. The exhibit will be displayed at LAM and the Lamar Dodd Art Center through April 20. Admission is free to residents, but donations are welcomed.