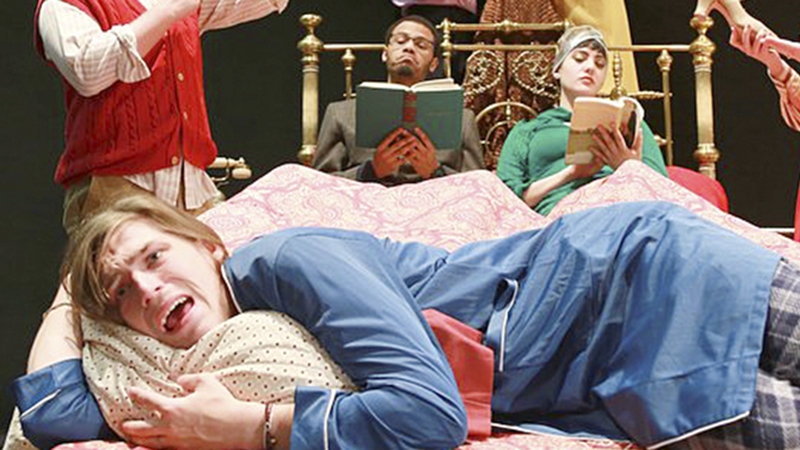 There’s a lot of action going on in LaGrange College Theatre’s production of “Bedroom Farce,” but it’s not what you’d imagine, according to director Kim Barber Knoll, Professor and Coordinator of the Theatre Arts program.

“Everything except what you expect to happen in a bedroom, happens in this play,” she said with a laugh.

The British comedy by Alan Ayckbourn will run Feb. 28 to March 4 at Price Theater. It takes place on one crazy night and involves four couples and three bedrooms.

Senior Caleb Brown and junior Elyse Barnett of LaGrange play Ernest and Delia, whose marriage has the greatest longevity in the show. They are celebrating their wedding anniversary.

“They really understand each other,” Caleb said. “But they are also settled into their life together and have a routine for everything. It’s when that routine gets interrupted that things get interesting.”

Newlyweds Kate and Malcolm have just moved into their new apartment and are hosting a housewarming party. Junior Leigh Anne Hamlin describes the couple as the “fun” one.

“Kate is kooky, funny and energetic,” Hamlin said. “She and Malcolm like to prank each other, and sometimes that can get a little out of control.”

Kyle Hildebrand, a freshman, said they both have good hearts.

“Malcolm thinks he is the world’s best fix-it guy, but everything he touches turns out wrong,” he said. “Kate loves him anyway.”

Even their arguments are sweet.

“At one point, they get into a fight and it’s the most polite fight in the history of the world,” Leigh Anne said.

Not every couple is so happy, though.

Junior Eli Grant plays Nick, who is married to Jan (senior Kelsey Seals). Nick is a thriving businessman who craves attention because he is in bed with a bad back for the entire show.

“He throws his back out just before he and Jan are to leave for the housewarming party,” Grant said. “Jan is no-nonsense and doesn’t give in to his need for attention, so she leaves him alone while she goes to the party.”

That’s where she runs into her ex, Trevor.

“Trevor is very self-obsessed and oblivious to everything going on around him,” said freshman Cole Reihing about his character. “He used to have a relationship with Jan but didn’t know how good it was until he married Susannah.”

Senior Sadie Gibson plays Susannah, who is described as a “disastrous wreck.”