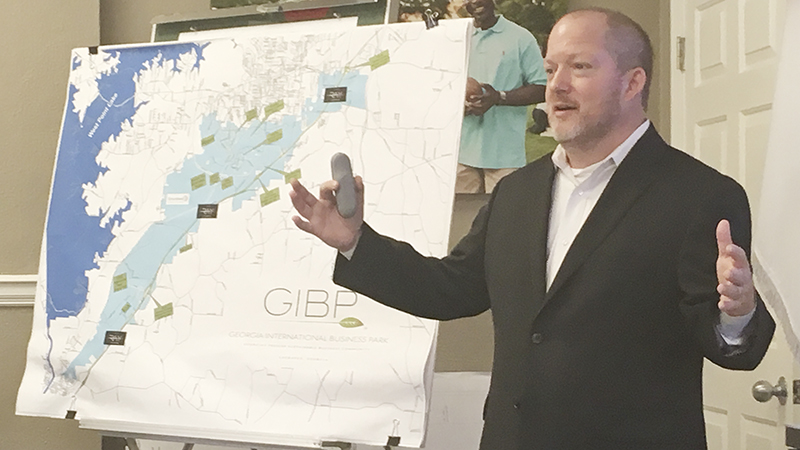 The City of LaGrange is looking to make a good first impression on the 500,000 plus visitors who are expected to drive through the city starting this spring.

During last week’s work session, the LaGrange City Council discussed plans to work with The Ray C. Anderson Foundation and other partners to ensure that exit 13 is beautiful and memorable. The exit is part of the Ray C. Anderson Memorial Highway, which has already undergone beautification efforts on either end of the memorial highway — at exits 2 and 18 and the Welcome Center near the state line. Exit 13 has become a focus for local leaders within the last year because of the influx of new business near that location.

“Some of you may or may not know that we have $1.1 billion in projects under construction right now,” Scott Malone said. “Exit 13 is now becoming a primary entrance for us for a couple different reasons. The first is Great Wolf (Lodge) is going to have over 500,000 visitors a year.”

Malone said that the gateway corridor program and the Georgia International Business Park will also drive beautification efforts in that area. The business park will be the largest area of its type in the southeast and fourth largest in the country, according to Malone.

The original estimated cost on the exit 13 beautification project, including water features, was more than $1.2 million. The water features on that plan made up roughly half the cost, or $350,000 a piece, and were removed in order to make the project affordable. Without the water feature, the installation is estimated to cost about $600,000. The City of LaGrange, Troup County, The Ray C. Anderson Foundation and the Callaway Foundation each plan to put $100,000 toward the project. Great Wolf Lodge and Selig Enterprises are expected to put $75,000 a piece toward the project. The Georgia Department of Transportation has also approved a $50,000 grant for the project.

“This is going to be a billboard for us — for our community — on Interstate 85,” County Commission Chairman Patrick Crews said. “It is great to have all these partners come together, and everybody try to chip in some money toward this so that we can pay for it and make it happen.”

Native plantings like switch grass are shown on the site plan, with an emphasis on low maintenance features. Troup County will be responsible for maintaining the landscaping after it is installed.

“We started looking at this project and seeing if we could capture that same essence on the highway where it’ll be a point of focus when you are coming down, and not have that maintenance nightmare (with a water feature),” Malone said. “We are talking about instead of a water feature, maybe having stone columns or some kind of thing that will draw your attention with lights on it that give you that sense of that water without that maintenance cost associated with it.”

The project is designed to be built onto over time if any of the interested groups wish to provide additional funding for the installation.

The Ray C. Anderson Memorial Highway has garnered a lot of attention since Gov. Nathan Deal dedicated the section of highway in memory of the Interface founder in 2014.

In 2016, Kia helped plant a butterfly garden at the Welcome Center. The center also features a WheelRight tire monitor, Wattway solar road, solar panels and car charging station were installed at the center. Native plants were also planted along sections of the highway in 2017.

“The Ray C. Anderson (Foundation) prompted a lot of this,” Mayor Jim Thornton said. “Great Wolf is now a participant and Selig is a participant, but The Ray started a lot of this before Great Wolf was even on the table. The (Ray C.) Anderson Foundation started this because of the Ray C. Anderson Memorial Highway. They originally hired Gary Gullatte to do a master plan for all five interchanges, and they have already funded some work at (exit) 2 and 18.”

Officials hope to have the new landscaping feature complete before Great Wolf Lodge’s grand opening on May 31.