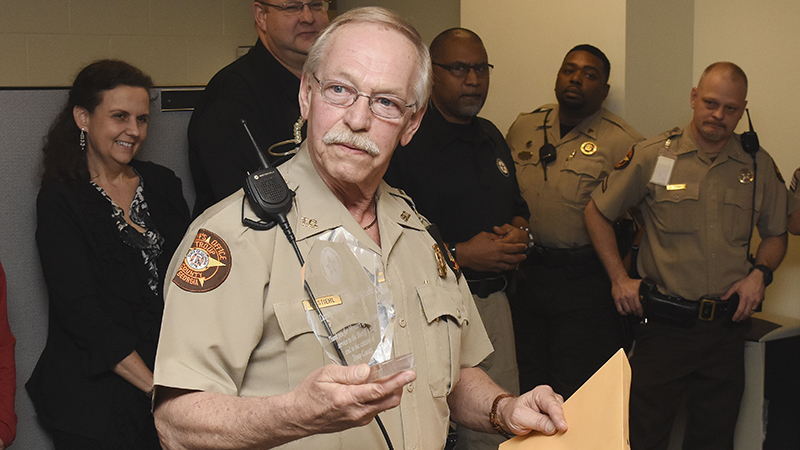 Rusty Stiehl served with the Troup County Sheriff’s Office for 10 years. A retirement service was held in his honor.--Daniel Evans

Over the last few months, Rusty Stiehl joked with Sheriff James Woodruff that he wanted steaks at his retirement party. Woodruff would always reply by saying that the steaks were marinating, but every time he took the lid off the pan they looked like sub sandwiches.

It became a running joke between the two as Stiehl’s retirement day approached.

Well on Tuesday, Woodruff and the Troup County Sheriff’s Office celebrated Stiehl’s retirement, and there were no steaks. However, there was a platter full of sub sandwiches and a lot of laughs, as they reminisced about Stiehl’s decade at the TCSO.

“It’s a [tough] decision to have to make,” Stiehl said. “I’ve worked with some good people, and I’m going to miss a lot of good people.”

Stiehl worked in law enforcement in Atlanta for nine years before transitioning to Delta Airlines, where he spent the next 28 years as a manager.

“I would not have retired from Delta if it hadn’t been for them talking about bankruptcies at the time, but I went ahead and retired,” Stiehl said. “Then I decided I was too young to retire.”

When Stiehl joined the TCSO, he was around 60 years old, but he still wanted to be on patrol.

“I asked Rusty on several occasions. I said, ‘would you take a position at the courthouse? People are mean out here ,and they don’t care,’” said captain Rick White. “It’s more for a younger person, and each time he refused. He said he wanted to stay out there. I respected him for that, and he’s always been a very respectful person to patrol supervisors, to all supervisors and the public. I admire him a lot for staying out there.”

Stiehl served seven years in the patrol division before transitioning to the courthouse. Even at age 70, he said he still missed working in patrol.

“I enjoyed the excitement and not knowing what’s going to happen next,” he said. “I finally decided at my age, about three years ago, at 67 or 68, that it was time. I’ve had some close calls, so it was time for me to move to the courthouse and let the younger guys do this.”

Now, Stiehl is retiring, and he means it this time. Just don’t expect him to completely stop working. He’s still a licensed real estate broker and plans to continue working in that field.