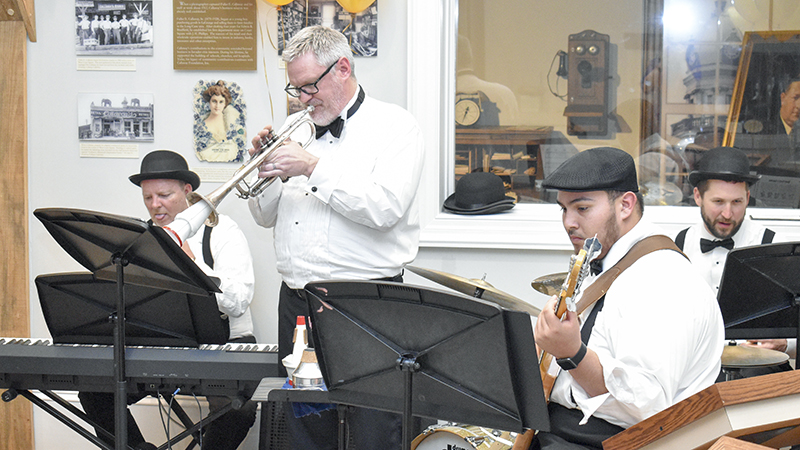 A celebration was held for the building that houses the Troup County Archives Wednesday night. The building is 100 years old. Above, a live band performs at the ceremony. Left, Susan Ferguson and Caryn Cole pose for a photo. --Alicia B. Hill

The sound of a live band playing “The Charleston” echoed past imposing hundred-year-old columns and down Main Street on Tuesday evening as the Troup County Archives celebrated its building’s 100th birthday.

The building that now houses the Troup County Archives has served as the home to a variety of LaGrange businesses over the years, including LaGrange National Bank and Citizens and Southern Bank. The Troup County Historical Society first moved into the building in 1984. The building now serves as both the home to official records from throughout the county, as well as a place to learn about the local history that is not in any text book.

“It is living history itself, so it is nice that we have this building, and we are able to put it to good use, so that it is not just getting run down or torn down,” said Haley Merciers, an administrative assistant at the Troup County Archives. “We are getting use out of it so that other people can enjoy it. Hopefully it’ll be around for another hundred years.”

A quick glance at the photos of the building over the years makes it clear that it was one of only a few large structures in the area in 1918, and buildings from a hundred years ago are still the exception in our modern landscape.

“There aren’t a lot of buildings in town that can say that they are 100,” said Shannon Johnson, executive director of the Troup County Archives. “A lot of buildings disappeared long before they were 100 (years old). As far as we see it, I figure that when something turns 100 — a person or a building — it should be celebrated, so that is what we’re doing.”

The celebration drew inspiration from the building’s opening in January of 1918, with popular music from the period, food made by local chef Jeffrey Tucker using a cook book published in 1918 and an exhibit that delved into what was happening the year that the building first opened its doors.

“The exhibit is entirely around 1918, so it covers a little bit of life in 1918,” Johnson said. “You see there are pictures of the building of course and Main Street — what Main Street was like — and the downtown area, but all the influences were pointed on people. We had just entered World War I in 1917, and World War I ends in 1918. A lot of life was driven toward that. The exhibit covers the war, the fashion that was dictated by that, the music, what people were driving, all kinds of things. Also, the flu epidemic (is part of the exhibit). Interestingly, the flu killed more Americans in 1918 than the war did.”

Regular visitors to the museum can expect to see the exhibit slowly change throughout the year, up to the historical society’s annual banquet in the fall.

“The title of the exhibit is ‘1918 LaGrange: Before the Roar,’” Johnson said. “We plan to evolve the exhibit over the course of the next few months and morph this into the ‘20s.  We do a banquet in the fall every year, and we’ll theme the banquet around the roaring ‘20s.”

This celebration is part of the growing list of offerings that the historical society has offered through the archives, and the archives’ staff said that there has been a lot of interest in the archives in the last year.

“It has been great, and I think the historical society in general — I’ve been here for about a year and a half now — has seen programing increase as well as attendance increase,” said Alex Hughes, the records manager at the Troup County Archives.

“With our annual banquet and the smaller events we do, like historic preservation events, preservation of documents and all of that. It is exciting, and we’ve got the ball rolling. We are looking forward to getting it rolling even more.”

The Troup County Archives is located at 136 Main Street and is open Monday through Friday from 9 a.m. to 5 p.m.  and on the first and third Saturday of each month from 10 a.m. to 4 p.m.