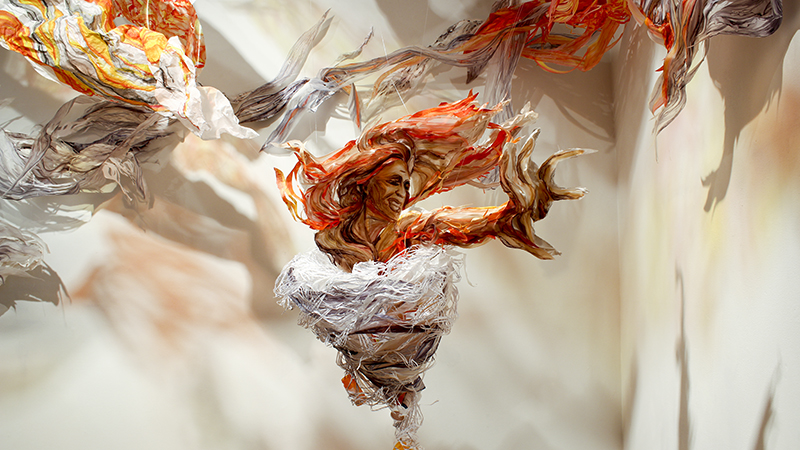 For Victoria Slagle, art is a way to explain her personal experiences with bipolar disorder that often defy words.

With each paper sculpture and installation, she attempts to bring the world inside her head out to where it can be viewed and spark discussion on mental health and healthy coping mechanisms.

“I use my artwork as a form of self-therapy as well as an opportunity to get that conversation started,” Slagle said. “I just want to say with my work, ‘Hey, this is what I’m going through. This is happening.’ I’m speaking up about it to say that mental illness is a somewhat normal thing. It is pretty prevalent in our society, but nobody talks about it. “

Slagle grew up in LaGrange, and she said that for years she was afraid of admitting to herself or anyone else that her brain worked differently than other people’s brains. It was only after leaving for college at Georgia Southern that she found the bravery to talk about how she felt during an art class. She said that actually talking about how she felt and making art based on that has had a huge impact on her life.

“When nobody talks about it, the people who are suffering silently feel so alone, and that makes healthy coping mechanisms and seeking help — whether it be through therapy or pharmaceuticals — that much harder,” Slagle said. “I just want to say with my work, ‘Hey, it is OK to talk about what you are going through’ and make it normal.”

Almost immediately after opening up about her personal struggles, she began to discover that she was not alone, and that other people faced similar obstacles.

“The cool thing was that after I started opening up to my classmates about it, other people started coming to me and thanking me for being strong and speaking up and talking to me about their experiences as well,” Slagle said. “Because, as I said, it is very prevalent in our society.

“Mental illness does not care if you are male or female or what kind of socio economic background that you come from, what color you are. This is something that is a human problem that our society has been trained not to talk about it. Any display of emotion is a sign of weakness when, in fact, putting your feelings out there is one of the hardest things and takes the strongest people.”

Her art employs scraps of paper and wheat paste that is sculpted into shapes representing the landscape of her mind. Initially the use of paper for her art was a financial decision to use what she already had on hand, but in some pieces — like those set to be shown in the Common Side Effects exhibit at the Suffering Artist in Hogansville — the paper itself is part of both the medium and the message.

“The medication guides — you know all the papers that have all the terrible side effects that are stapled behind your prescription when you pick it up — they were horrifying,” Slagle said. “Actually, part of the installation work itself are the medication guides that I’ve cut up and formed into sculptures. That is where that title came from was from my work at the pharmacy (that I worked at in college).”

Her work generally does not hang on walls. It physically fills spaces with the emotion that she felt while creating it.

“It is art that lives in the space, and so the viewer can walk around and interact with it,” Slagle said. “I’ve had people from the bipolar community come and view it and say that my work shows what it is that happens in our brains in a visual manner. So, I am excited for people who I grew up with to see what is happening in my head.”

Slagle will be one of four artists featured in an exhibit titled “Out of the Ordinary” at Artisans on the Square in Greenville from Feb. 24 to March 24. The opening reception will take place on Saturday from 5 p.m. to 8 p.m. at 397 LaGrange Street in Greenville.

Slagle’s work will also be exhibited along with the work of Sara Adams in a show titled “Common Side Effects and Similar Figures” at The Suffering Artist in Hogansville beginning on March 3. The opening reception is scheduled to be held from 6 p.m. to 9 p.m. at 311 East Main Street.