The role of Christ in college 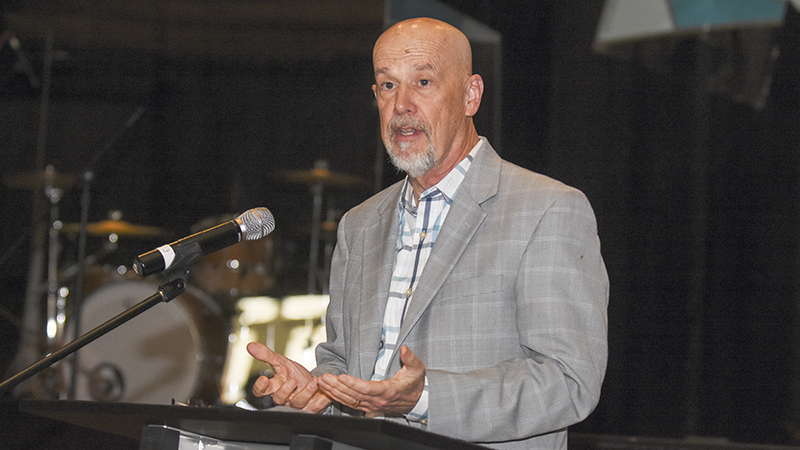 Point University President Dean Collins said Thursday that Christian higher education is extremely important in a world where the number of young churchgoers is declining.

Collins spoke at First Baptist Church on the Square’s monthly men’s luncheon, and he discussed how Point, which moved to its location in West Point in 2012, is growing in attendance.

“The church unfortunately is shrinking a little bit in its influence in our country and our communities. And in particular, we are losing our young people,” Collins said. “I think that Christian education, not just higher education, but Christian higher education, is critical to fill the deficit to meet college students at a time in their life, where they are struggling naturally, developmentally with their identity, what they are going to believe, what they are going to do and what their values are.”

Point currently has an enrollment of just over 2,000 students, including around 800 dual enrollment students and 725 traditional students. The rest are online students, a growing area for the college. Collins said in the next five to 10 years Point hopes to push its online enrollment to between 4,000 and 5,000 students.

“Those students help bring the financial stability that allows us to do more and grow that local population,” he said.

Collins said he doesn’t believe Troup County needs Point to be a huge university. He thinks it would operate best with at a cap around 1,500 traditional students.

“Locally we don’t think West Point and Troup County need a large university,” Collins said. “I feel like 1,200 to 1,500 is about the right size because you don’t want to dominate the town.”

However, the college was originally placed in East Point on farm land inherited by the Hathcocks.

The college focuses strongly on its Christian beliefs, making employees sign an agreement that they will uphold a Christian way of living. However, they are also trying to reach non-believers, Collins said.

“We are also intentionally inviting non-Christians to our campus because we want them to be exposed to the gospel through their education and training,” he said. “We see what we do at Point University as not just trying a good accountant or helping someone get their MBA or finishing med school. We want them to know Jesus along the way.”