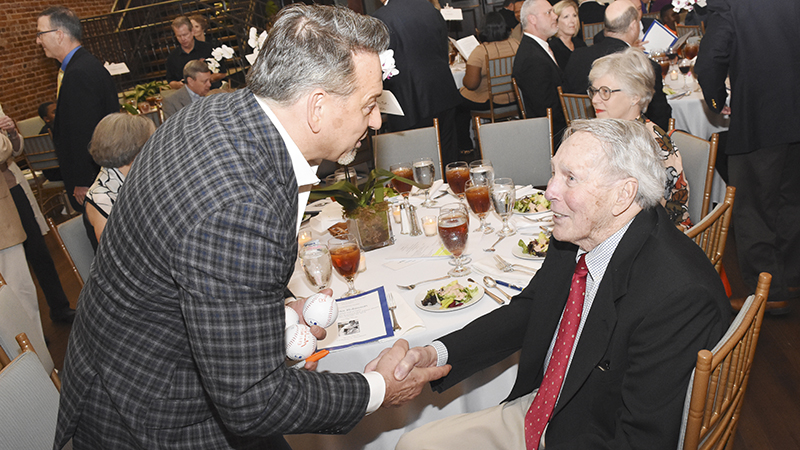 NOTE: This story has been edited to correctly identify which ballpark Robinson played in.

Robinson, who is now 80 years old, played for the Baltimore Orioles his entire 23-year Major League Baseball career. He’s considered one of the greatest third basemen in MLB history and won 16 consecutive Gold Glove Awards during his career.

He was elected as a first ballot hall of famer in 1983.

Robinson earned the nickname “The Human Vacuum Cleaner” because of his defensive prowess, and many lifelong fans lined up to get his autograph before and after his speech. He was named AL MVP in 1964 and was World Series MVP in 1970.

He signed with the Orioles in 1955 and really started his playing career in 1959 after fulfilling a U.S. Army obligation.

“I signed for $4,000, which was the most you could get,” Robinson said. “If you got more than that, you were a bonus player and had to go straight to the major leagues.”

Robinson was asked about the biggest differences in the era he played in and the current one. He said money was the biggest change, considering baseball stars today make millions of dollars a year.

“I used to get embarrassed any time I struck out. I really did and that’s the way most of us felt. Guys strike now 160 something times, don’t play all the games and they don’t think anything about it,” he said. “Just trying to hit home runs. Home runs make you a lot of money.”

He also said that he felt like he played in the best era of baseball.

“You always try to compare generations and I can only tell you, I played with the best players at the best time,” Robinson said. “You talk about Mickey Mantle, Willie Mays, Hank Aaron. I played against Hank and Willie in the all-star game and Ernie Banks.”

Robinson also had fun with his age and his career Thursday night.

He still owns the MLB record for hitting into the most triple plays with four, and for a long time he owned the record for most double plays hit into as well. He’s now fallen to eleventh on that list, according to Baseball-Reference.com.

“As far as hitting into triple plays, you’ve got to be pretty good to do that,” Robinson joked.

He still works with a lot of nonprofits, and he still gets recognized by many who watched him growing up. Of course, he also has many young people come up to him to get his autograph, even if they aren’t sure exactly who he is.

“One [kid] said, did you play with Babe Ruth?” Robinson said when talking about his many run-ins with younger fans.

After his speech, Robinson fielded questions from the large room at Del’avant. He was asked whether Barry Bonds, Roger Clemens and other alleged steroid users should be allowed in the Hall of Fame. His answer: No.

Robinson, who hit 268 home runs in his career, was asked if he might’ve hit a few more homers if he had played in Camden Yards, instead of Memorial Stadium, a large ballpark.

“I was only a couple [home runs] behind Hank [Aaron],” Robinson joked, referencing one of MLB’s all-time home run leaders.

Of course, the night was focused on the Boys and Girls Clubs of West Georgia. A silent auction was held and autographed baseballs were sold to raise money. A vacation was also auctioned off.

For 26 years the club has provided after school programming for children in first through twelfth grade. They focus on academic success, good character and citizenship and healthy lifestyles.

Although the final amount of money raised was unknown Thursday night, Boys and Girls Club President J.J. Kuerzi said the money raised will help in many ways.

“A lot of the kids don’t get a lot of exposure so the more we can expose them into the community, the more they benefit from that,” Kuerzi said. “[The money raised] helps with our field trips, it helps with our summer programming as well as our after-school programming. It’s just like anything else. The more resources you have, the more you can provide.”

Local clubs are located at Hogansville Elementary School, Callaway Middle School and East Cannon Street in LaGrange. Around 400 children are currently registered at those three locations. The Chambers County Club also operates under the Boys and Girls Clubs of West Georgia.