Songs That Won the War 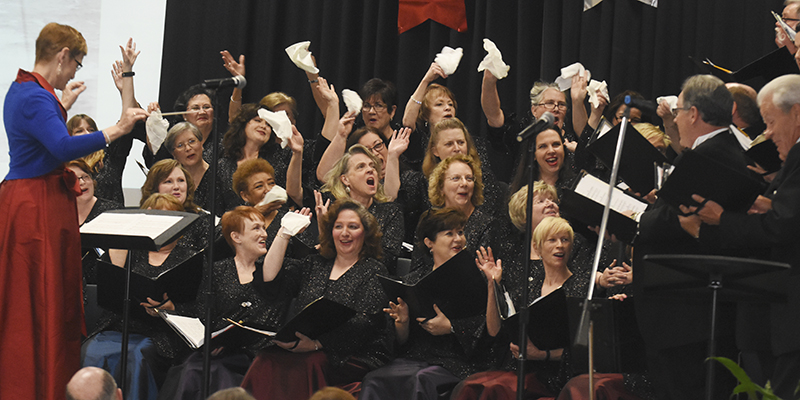 Above, The Choral Society of West Georgia performs the song “We Saw the Sea” during Saturday night’s concert at Callaway Conference Center at West Georgia Tech. --Daniel Evans

Every seat was taken Saturday night at Callaway Conference Center for a special performance from The Choral Society of West Georgia and the Auburn Knights.

The concert, titled “The Songs That Won the War” was created to honor World War II veterans and to perform songs that would’ve been popular during the war. Carol Cain also performed as Rosie The Riveter.

The songs performed included “This Joint is Jumpin,” “In the Mood”, “This is the Army, Mr. Jones,” “We Saw the Sea,” “Don’t Sit Under the Apple Tree,” “Don’t Get Around Much Anymore” “Moonlight Serenade,” “Chattanooga Choo Choo,” “Googie Woogie Bugle Boy” and “God Bless America.”

“I know all these songs. They were popular back in the late 30s, the 40s and early 50s,” said World War II veteran Elmo Bradfield, who said before the show that he was looking forward to hearing songs he hadn’t heard in many years.

“I love music. I can’t sin,g and I can’t play an instrument but I love good singing.”

Swing dancers from Auburn were also in attendance, and a dance floor was open throughout the night for anyone to use.

The event also featured a video from the “Faces of World War II: West Georgia” exhibit that was prepared and curated by Isabelle Knight, Bobby Cammon and Terry Hoppe for the Troup County Archives in 2013.

The show was completely sold out by Thursday morning. Tickets included a meal and glasses of wine.