K9 Rik Retires: Dog diagnosed with cancer, city to pay for all treatment 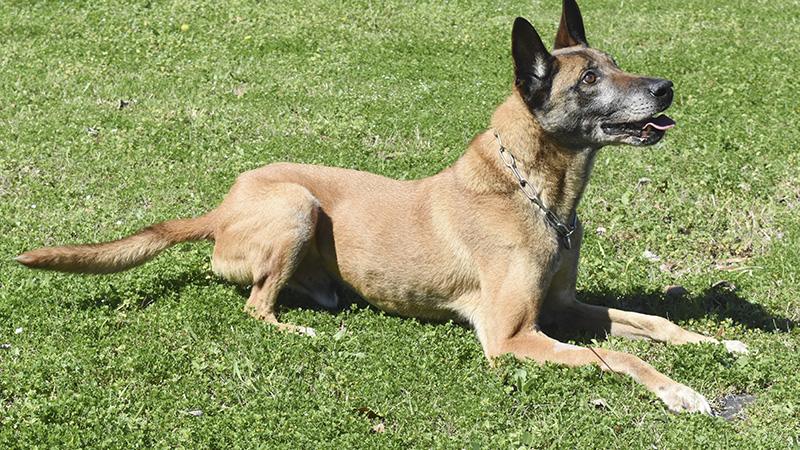 K9 Rik waits for Sgt. Clayton Bryant to throw a toy Wednesday afternoon. Rik was diagnosed with lymphoma and is undergoing treatment.--Daniel Evans

The LaGrange Police Department is saying goodbye to K9 Rik, who is being forced into retirement after a recent cancer diagnosis.

Rik has served with the LPD for six years, including four with his current handler Sgt. Clayton Bryant. Rik, a 9-year-old Belgian Malinois, has been utilized to sniff out narcotics and to search for criminals and missing people.

Rik was actually going to retire at the beginning of March, mainly due to his age and high blood pressure. Bryant had also looked at taking a promotion — one he has since accepted — which made the timing work out perfectly for Rik’s retirement.

Then, everything changed. Two weeks ago, Rik took a turn for the worse. Rik and Bryant tracked an armed robbery suspect for hours on a Tuesday night and by the next morning Rik was feeling bad. He wouldn’t eat and couldn’t get in and out of the vehicle he’d been jumping in and out of most of his life.

The veterinarian was confident that Rik had cancer, even without an exploratory surgery. On that Friday, they gave him his first treatment of chemotherapy to see how he would react.

“For a day or two, I was on pins and needles, but he got his first treatment Friday morning and Saturday afternoon when I left for work, he was standing at his kennel wondering why he wasn’t going,” Bryant said. “So, within 36 hours of first treatment, he was close to 90 percent his normal self.”

The cost of all of that treatment adds up quickly. Bryant said each treatment costs around $100, not counting any additional expenses.  After the initial treatment, Bryant and his wife Wendy — who also works in the LPD’s K9 department — had to figure out what was best for Rik and whether they could to move forward with treatment. That’s when the city of LaGrange stepped forward, saying the city would pay for all future treatments.

“It was a blessing,” Wendy said. “We can’t thank people enough. When we get into these fields, the dogs probably shine more than we do as officers a lot of times. We have a lot of people who support the dogs and the K9 unit throughout the police department and the community too.”

Clayton said it was the right decision, and he was thankful for the city’s generosity.

“I’m grateful and thankful for the decision to do really what’s right. He’s served the citizens here for six years. As I’ve said before, there’s really no way to measure his production because it goes far beyond anything you can chart,” Bryant said. “There’s no telling how many situations were diffused just because he was there. That goes for any of our K9 units really. The impact they have on the community is really immeasurable.”

The relationship between a K9 dog and its handler is a special connection. They spend 600 hours together in K9 handler school and have mandatory training each week. Bryant estimated they spend 30 percent of their lives with their dogs.

Now, Bryant is just happy for whatever time he has left with Rik.

“The prognosis could be a year, two years, six months. We don’t know,” Bryant said. “The vet has assured me he’s not in any pain, so as long as he’s responding well to the medication and has a good quality of life — whether that’s six months or two or three years — he’s certainly earned the right to spend his last few months with the family and being a dog.”

Clayton said there were many times where he’d have to force Rik to call it a night because he was getting tired. One time Rik even sensed that Clayton was feeling bad and stopped working to sit down and check on him.

“I literally had to sit down because I felt myself blacking out ,and as hard as he works, he recognized that,” Clayton said. “He came over and sat down right beside me. His desire to work was outweighed by his loyalty me.”

Clayton said he completely trusts Rik and knows that he’d never give up.

“It’s very hard as a human to learn to trust an animal, but you spend so much time with him. We humans are almost always the weak link when it comes to a K9 team,” Clayton said. “Just time and time again, he came through to the point that I trusted him as I would trust any human or more so. No matter how far behind we were, no matter how bad the weather was, no matter how bad the deck was stacked against us, he would never quit. He just never quit.”

With Rik’s retirement, the LPD’s K9 unit could look very different in the near future. Wendy Bryant’s dog, 11-year-old Chico, is also likely to retire this year.