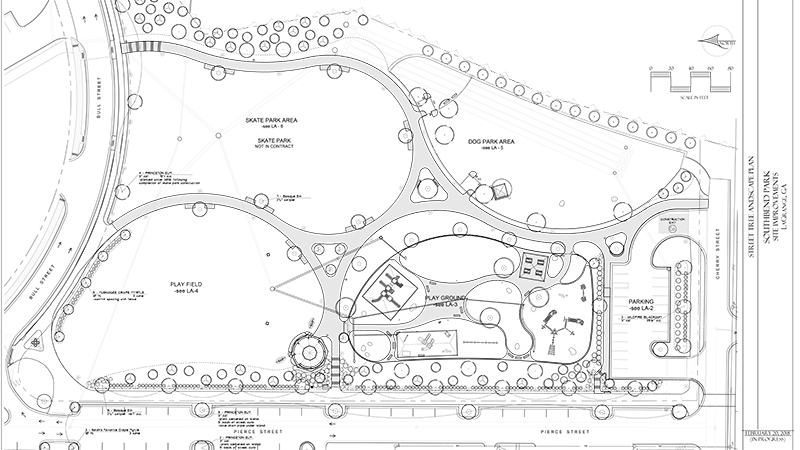 The south side of downtown LaGrange will undergo a major transformation this summer as the Callaway Foundation installs a new park complete with a dog park, a playground, a pavilion and a large grass field.

“Immediately behind the skate plaza (that the city is building) on the back part of the park will be a dog park, and then adjacent to that and immediately behind the open play area will be a new playground with new playground equipment,” said Speer Burdette, the president and general manager of the Callaway Foundation.  “Some of that will actually be covered so that the playground equipment doesn’t get so hot in the hot summers that we have here. Then there will be a nice pavilion that will sit at the crest of the hill for people who want to get out of the sun. Weaving through all of that will be The Thread, so there will be walking trails.”

After the construction is complete, the Callaway Foundation plans to give the park to the city in what has become a standard lease agreement between the entities of a nominal fee — often as low as $1 and like under previous agreements the city will cover maintenance and utility costs in exchange for use of the property by the city and its residents. The City of LaGrange has been working on the details of the skate plaza that will fill one of the corners of the park for almost two years, and construction is expected to begin on that section this spring with an open date of August.

“The council decided to invest in the skate plaza, and we went ahead and moved forward with that, but we always knew that the Callaway Foundation was planning to make a very significant investment in that other area around it,” Mayor Jim Thornton said. “So, when you add in our skate park that we are building to all that we are planning to do, that is really going to be a very significant and transformative project for the south side of downtown.”

Some parts of the project like sidewalks have already been completed, and some landscaping elements may be installed within the next few weeks.

Because of the curve of Bull Street, large parts of the park will be visible from the square. The Southbend pavilion is expected to be clearly visible from downtown.

“It sits up on a hill, so when you come down Bull Street, you are going to have a nice view of this beautiful building that they are going to build,” said City Manager Meg Kelsey during Tuesday’s city council work session.

Burdette was likewise excited about the view that the new park will offer.

“If you walk out the door of the Courtyard by Marriott hotel, and you have the light from LaFayette Square and look south, you see a new vista of this park,” Burdette said. “You begin to get a sense of how it changes the south end of town.”

He said he hopes the park will have a positive impact on the entire city.

“I hope it will have an impact on the whole town,” Burdette said. “It is not really a neighborhood park. This is a city park for all of LaGrange and Troup County, much like Granger Park is used by people all over the city. We expect that this park will also be used that way. It’ll be a nice, pretty (area). We’ll have zoysia grass, and it is going to be upscale with nice, decorative lighting, playground equipment and benches. This will be just a nice complement on the south end of town. It will be a place where people can come with their children and sit out there on a pretty day on one of the benches and enjoy being out in the fresh air.”

The Callaway Foundation has owned the land for several years, and with the recent development on that side of town — like Wild Leap Brew Co. — they felt that it was the perfect time and place to create a community space on that end of downtown. The dog park especially has been a major point of consideration for several years.

“There has been discussion for a long time,” Burdette said. “This is something that you see in other communities. There will be people that say, “Gosh, we’ve never had dog parks before. Our dogs were always able to run loose.” But with what we have today, dogs can’t run loose. They have to be inside fences or on a leash. This is an area where people can go with their dogs and let their dogs run inside the fenced area of the dog parked. They’ve been popular other places, and we think we would like to really try it here.”