Construction on Part Three of The Thread to start in April 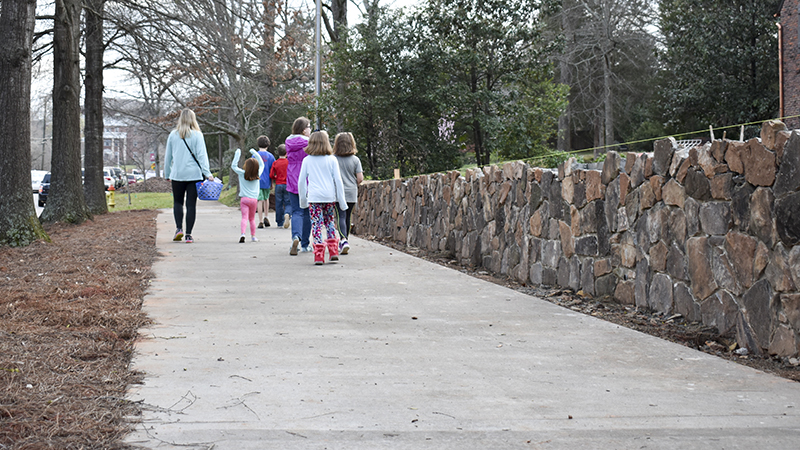 Several children walk along a sidewalk on Broad Street. The area will soon become the third part of the The Thread walking trail. Construction is expected to begin on the third section of The Thread in April. --Alicia B. Hill

As construction on the second segment of The Thread nears completion, the City of LaGrange and Friends of the Thread are looking forward to the next segment, which will extend down Broad Street.

The third segment of the trail is expected to begin construction near the end of April and will be just under a mile (0.9 of a mile) and will start at Granger Park, turn onto East Haralson Street then Greenwood Street. From there, the trail will follow Broad Street west past the roundabout and turn onto Panther Way. The segment will end where Panther Way meets Vernon Street. The Thread master plan shows the trail continuing past that point with the construction of the seventh segment. This will be the first section of the trail to be built primarily beside a roadway.

“This is our first street project,” City Manager Meg Kelsey said. “Our other two segments have been more off-road.”

Because bids for the construction of this segment will not be considered by the city until late March, the exact cost of the section is unclear, but The Thread is estimated to cost approximately $1 million per mile on average. However, the cost of projects near the trail — like the water fountains at Granger Park, the basketball courts at Eastside Park and the powerlines that will be buried as part of the Broad Street segment — are generally not included in that estimate.

“The trail project has been an opportunity to make other improvements in parks or on the streetscape where the trail goes,” said Leigh Threadgill, the city planner and a member of the Friends of the Thread. “It is an open drive, and it kind of points out where there is room for change or improvement.”

The first two sections were purposely built in different parts of town.

“They are disconnected, and we did that intentionally,” Threadgill said. “We wanted to balance implementation of the project throughout the community, so that folks who are hearing about it could experience it in their neighborhood without having to travel to another part of the city. Now that we are wrapping up our segment two. We are going to be getting underway on segment three, and we are going to hop back up to connect some trail now.”

After the Broad Street segment of The Thread is built, the trail will cover 4.2 miles of the 29 planned miles. The segment at Granger Park is 1.2 miles long. The Calumet segment is 1.6 miles long and connects to a half mile of existing trail for 2.1 miles on that section.

Those over the project hope that the new section will help accommodate walkers and cyclists aiming for distance.

“One of the things that we get a lot from the citizenry is that we need more mileage that is contiguous, connected,” Threadgill said. “Especially cyclists are looking for the mileage. Right now, pedestrians and walkers, I think they are still wanting a little bit of a change in scenery, but when we start getting more miles connected, I think cycling will pick up.”

“We went ahead and built a very small section in front of 400 Broad, on the corner of Broad (Street) and Gordon (Street),” Threadgill said. “We did that to coordinate with that homeowner who saved four willow trees, and we are working hard because he had a desire to save those. We had an opportunity while he was doing some work to get an easement from that property owner.”

The path of the trail did encounter one major problem on this segment — power lines that cross from one side of the street to the other. The Thread design would conflict with powerlines on the same side of the road as the trail, especially when there are narrower stretches between homes and the road.

“From North Greenwood to Springdale, the overhead powerlines are on the South side of the street,” Threadgill said. “From Springdale to the roundabout, they are on the North side of the street. They are right above the trail. There are power poles in that section that are going to be a conflict for the trail, so we went ahead and made the decision to bury the utility lines from Springdale to the roundabout.”

Because of the third segment’s location near the LaGrange College campus, plans show the lighting for the portion of the segment beside the college as lamps similar to the type that already in place throughout the college campus. The city has also put in a request with the Georgia Department of Transportation to narrow a small portion of Broad Street to 26 feet in order to accommodate the trail.