Recycling problems: Lack of curbside participants is a problem for city 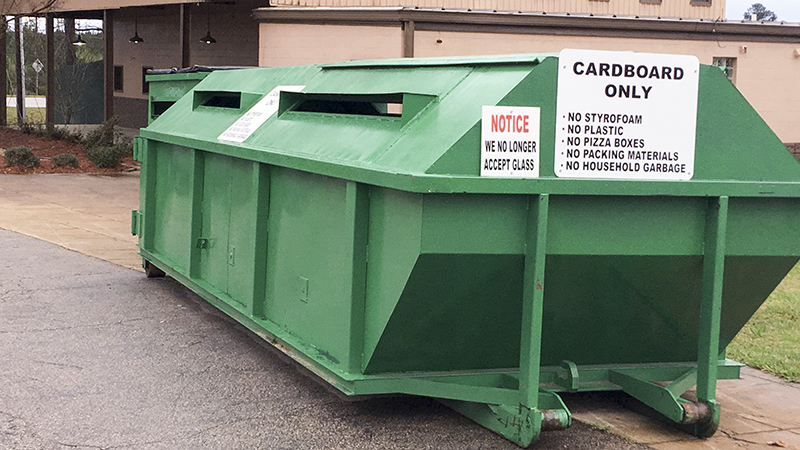 The City of LaGrange is in the process of reviewing its free curbside recycling program due to higher costs and lower participation rates than originally anticipated.

The city launched the program on Jan. 1, 2016 — with the knowledge that it was unlikely to make money — in response to citizen requests. Since then only 1,017 LaGrange households have signed up for the program. The city planned to sell recyclables to make up for the cost, but estimated that at least 1,500 households would need to sign up and costs would remain roughly the same.

“If you look at the number of households in the city, this is only about 7 percent of households in the city that are actually participating in the curbside program,” City Manager Meg Kelsey said. “The Sierra Club actually put some stuffers in the utility bills — they paid to do that — and they have actually increased our subscribers over 150 accounts in the last two weeks. So, that was a successful push. We were around 800 prior to that, so we have picked up more accounts.”

Kelsey said that she hoped more education on the program would result in more participants, but the lack of participation wasn’t the program’s only problem. It also required an additional $60,000 this year to replace inmates from the correctional institute with city workers to sort curbside recycling.

“We did lose manpower at the beginning of this fiscal year because we lost the inmate help at the recycling center which would take in those curbside recyclables,” Kelsey said. “We’ve also had to put money in the new budget to hire more people because we don’t have those inmates, so we put two people in the budget to hire. We’ve had problems hiring in that capacity. We are staffed now, but it is difficult to find people who want to do this type of work.”

Between the lack of participation and staffing the new positions, the program is expected to cost the city $160,000 this year. Estimates for the program’s cost in 2015 were $80,000 a year. Additionally, if the program remains as it is, that cost will likely rise with the purchase of machinery to sort recyclables.

“We really don’t have the machinery over there to operate a recycling program to the magnitude of what we are picking up curbside now,” Kelsey said. “We basically are hand sorting, so when they bring in the truck, there are two people standing there, and they are just manually, by hand sorting this. If you look at other operations, they actually have the machinery and equipment to do these processes. Because we are doing it by hand, it takes a lot longer for us to do.”

Kelsey and other city staff have been looking for solutions that would make the curbside recycling program cost effective. One of her top recommendations was to allow a contractor to take the recyclables — which would not cost the city anything, but would result in the city not receiving money for the sorted recyclables.

“We’ve talked to a company in Columbus called Pratt Industries, and they’ve been willing to take our curbside recyclables,” Kelsey said. “What we can do is we can actually store those recyclables on the truck and keep those on the truck for about two weeks until that truck is full (then) deliver that recycling material to them. They will take it, and they will not charge us a fee to take those recyclables. So, we would not have to have people at the center. Now, the only downside to that is we don’t have any recycling revenue (from curbside recycling).”

“That is why we want to take it to Pratt, so that you aren’t spending all your time sorting the plastics and the mixed material because they don’t bring as much,” said Chris Prather, public works operations manager for the City of LaGrange. “The cardboard brings more than anything. When Scott (Allen) was out there, he couldn’t sort cardboard because he couldn’t keep up with all of the mixed single strain recycling. … We can focus more on recycling, and what is delivered at the recycling center should improve over time.”

The corporate cardboard recycling made up the single largest section of recycling income for the city.

“About 30 percent of the curbside that we are picking up is what we call contaminated,” Kelsey said. “So, people are not abiding by what is on the sheet that we give them when they get that container that (lists) what cannot be recycled. Things like plastic bags, wire hangers, if they are bagging it, we don’t want them to bag it, and sometimes you find household garbage in these containers.”

Pratt has offered to assist with educating citizens on what can be recycled and how if it takes over curbside recycling. According to Kelsey, Pratt, which is the fifth largest corrugated packaging company in the U.S., has seen education reduce contaminated recycling from 30 percent to 10 percent in other cities. The possibility of combining a recycling campaign with the city and county’s anti-littering campaign was discussed, but steps are already being taken to reduce contaminated recycling.

“They would also be willing to help us launch an educational campaign … to kind of help us educate the public more on what to put in these cans,” Kelsey said. “We are also beginning to tag containers that are out on the street when we open them up, and we see something that we can’t pick up. So, we are not picking it up. We are putting a note on the container.”

Additional solutions for the curbside recycling program were also considered. Councilmember Tom Gore suggested a small fee — between $4 and $11 — for households using the curbside recycling service. However, based on survey responses from when the program began, there were also concerns that people would cancel the service if a fee was instituted. Of those who completed the survey, 50 percent said they would not be interested in the service if charged $2 to $4. A 50 percent decrease in households using the service would make it unprofitable even with a small charge.

Councilmember Mark Mitchell asked about the possibility of using inmates from Merriweather County to sort the curbside recycling. Councilmember Nathan Gaskin suggested using a local contractor or hiring local youth to sort the materials, noting that while it would still cost the city money, those funds would give local youth jobs and keep them out of trouble.