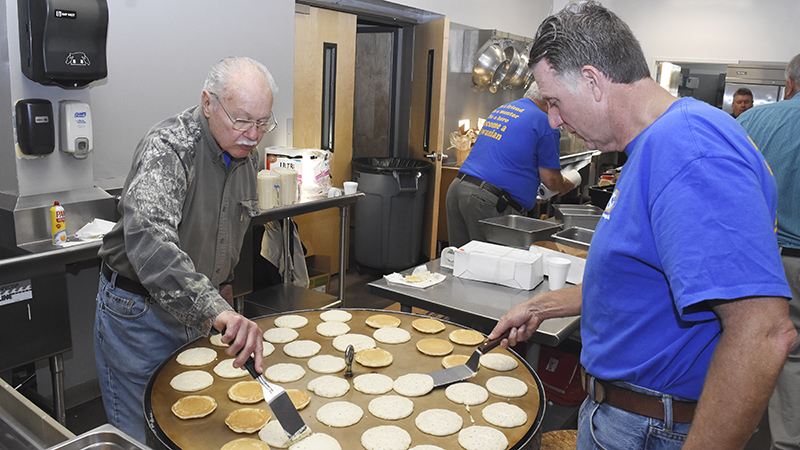 Hundreds of people lined up Saturday morning at First Baptist Church for all you can eat pancakes, a fundraiser from the LaGrange Kiwanis Club.

This year’s pancake breakfast was the 23rd annual for the Kiwanis Club, and more than 2,000 pancakes were made in all. The club was expecting to feed around 750 people, a little more than in previous years. All the money raised goes toward scholarships, which are awarded to local students.

The money raised at least year’s breakfast helped the club give out five scholarships in 2017.

“We’ll make about $7,000 to $8,000 and all of that money goes to scholarships for local high school students, LaGrange College students, so it all stays here in the community. The more we raise the more we give to kids in the community,” said Stephen King, who was organizing the breakfast for the 20th straight year.

“We got overloaded with only one pancake cooker,” Tate said.

The cooker spins, making it easy for Kiwanis Club members to flip the batter. It takes three minutes per cycle, Tate said. A couple of times Saturday, Tate, Craig DeLoach, Marc Acree and Jerome Alford actually got ahead of the demand — until another line of hungry people came through.

“When you get this thing going, you can cook 33 pancakes [at once],” Tate said.

King said for many people in the community the breakfast has become a family tradition.

“I know one guy brings his daughter every year, and they have a father-daughter get-together. I know others who bring their family,” King said. “We have people come from Harris County and probably Heard too. It’s almost like a ritual every year, they come up here the first Saturday of every March.”

Piggly Wiggly and Kimble’s Food by Design donated syrup and other items to help with the breakfast, King said. There were two syrup containers at each table and at least 20 others available, with many different flavors.

King said this would be the last time he would head the pancake breakfast because he’s retiring, so someone else will take it over.

“Good luck,” King joked. “I’m going to write out some directions and timeline. Everybody knows a little bit about it, you’ve just got to have somebody to make it happen.”

The Kiwanis Club has approximately 55-60 members, and all of them played a part in helping with the breakfast Saturday.

Recycling problems: Lack of curbside participants is a problem…