Racing for kids: Awesomesauce for the community 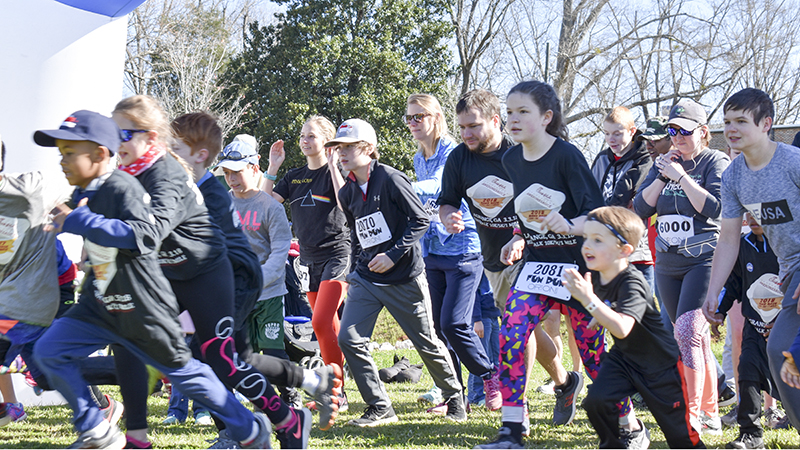 About 243 runners raced to support Chick-fil-A’s Winshape program and the children it serves on Saturday at the sixth annual Awsomesauce Race.

The annual race raises funds to support Winshape Camps for Communities — like the one that has been held at LaFayette Christian School last few years — and other Winshape programs. This year the race began next to The Model Mile of The Thread. Children played games and enjoyed inflatables in the field next to the starting line behind St. Mark’s Episcopal Church from early in the morning until the winners were announced.

“We just love to bring the community together and do an event where families can come and have fun,” said Josh Sells, the operator of the Chick-fil-A on Commerce Avenue. “We can raise money and raise awareness for our camp. Just getting to see all of this is awesome.”

According to Sells, the race usually raises around $20,000 for Winshape, but the race also provides an opportunity to interact with the community for both Chick-fil-A employees and Winshape staff.

“We get to step out of our normal summer camp and expand more (to the community),” said Jessica Beeler, camp director for the yellow team for Winshape Camp for Communities.

Registration for the 2018 Winshape Camp for Communities in LaGrange opened online Sunday, and there was a booth where parents could register their children for camp at the event, while their children played with camp counselors nearby.

“The thing that is nice is this is a family event,” said Kathryn McFarland, a cardiologist at Emory Clark-Holder Clinic in LaGrange. “So, all of these kids that are playing football, they get to see their family members doing this, and they are more apt to participate in athletic events, not just look at them, but participate in them.”

She said that events like the race also provide adults with a fun way to exercise where they feel supported instead of discouraged. Between volunteers and racers, about 25 people from Emory participated in the event, and a group from the medical provider gave out water and raised awareness for colorectal cancer screening month, which is in March.

Several other local businesses participated in the event as well.