Great Wolf remains on schedule to open in May 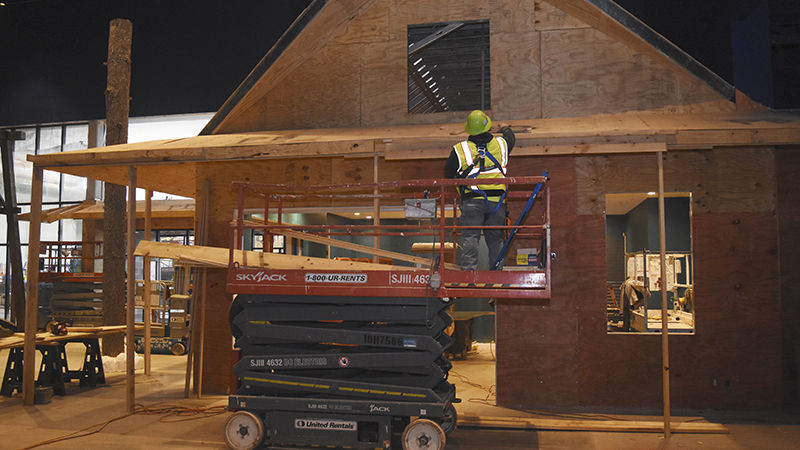 Great Wolf Lodge is just two months away from opening its Georgia location, and the final shape of the resort is beginning to come into focus.

While freshly dug red clay is still clearly visible throughout the property, the inside of the resort’s structures are preparing for fixtures, flooring and furniture. This progress puts the resort on track to open on time by May 31 or even sooner, according to Great Wolf representatives.

“Construction is going really well,” said general manager Keith Furnas. “Knock on wood, we’ll stay ahead of schedule. As we are right now, we are taking reservations for May 31, and we are hoping to move that date forward a little bit.”

Furnas said that he thinks many of the employees hired to work at the resort will be from the Troup County area, and Great Wolf is already taking online applications.

“Every position that we have available is out there online at Jobs.greatwolf.com, and you can just apply online,” Furnas said. “We are looking forward to hiring as many folks as we can.”

Great Wolf Georgia also plans to host a local, on-site hiring event early in April. The specifics of the event were not available on Wednesday, but Furnas said it is likely that interviews will take place in the temporary offices that the resort is currently using. He said that the resort plans to hire about 600 “pack members,” though the number could vary depending on the number of full-time employees versus part-time employees.

“That is the tricky part because it may end up being 400 people, or it could be up to 750 depending on the breakdown of what we get,” Furnas said. “We like to have a good balance of full and part-time pack members.”

He also emphasized the fact that locals will be able to take advantage of most parts of the resort without spending the night, including a ropes course, a climbing wall, an arcade, putt putt golf and a variety of restaurants.

Only the water park and accommodations are reserved for hotel guests, but with two slides that are the first of their kind in North America, he is confident that the hotel and water park will stay busy. Reservations at LaGrange’s Great Wolf are well ahead of where previous resorts were at this point.

“Our booking pace is fantastic and looking back at the past four lodges that we’ve opened, we are outpacing every one of those operations,” Furnas said. “There is a lot of excitement.”

Great Wolf expects to primarily see guests who live within four hours of the resort, and LaGrange’s location within two hours of several large cities is working in its favor, according to Furnas.

“The biggest part is coming out of Atlanta,” Furnas said. “We do have people coming from Birmingham, Montgomery, Columbus and just all sorts of areas in between and even outside those areas.”

However, he said he did not think that the large number of visitors would have a negative impact on area traffic.

“I’ve worked at several Great Wolf Lodges that were super busy, and with the traffic pattern and the way people come and go, typically it is not really that big of an issue, but we’ll always keep an eye out for it if there is something that we need to react to,” Furnas said. “We’ll be ready.”

Great Wolf Lodge recently committed $75,000 toward the beautification of exit 13 on Interstate 85, a section of road that the majority of resort guests will drive through. The total project cost for the exit’s landscaping is $350,000, and the Callaway Foundation, the Ray C. Anderson Foundation, Selig Enterprises, the City of LaGrange and Troup County all contributed toward the project as well. Furnas said that the beautification project is just one of many thing to be excited about in LaGrange and Troup County.

“I think all around for the City of LaGrange and Troup County, they’ve got a lot of great projects, a great community,” Furnas said.

“They’re looking to raise their status for us and themselves and beautify it. There is a lot of work that is going to be happening right here at Exit 13 to enhance the look and feel as you drive in, as well as right out front along Tom Hall Parkway. A lot of great projects to bring new things into the area and new companies and new restaurants and retail and things like that [are under consideration].”

He said that he plans for Great Wolf Lodge will be part of the community and participate in local events to get to know the community.

“Our kids experience team at other locations has gone out to different charity events,” Furnas said. “Whether we do face painting or balloon animals or whatever we can do to participate [we do].”