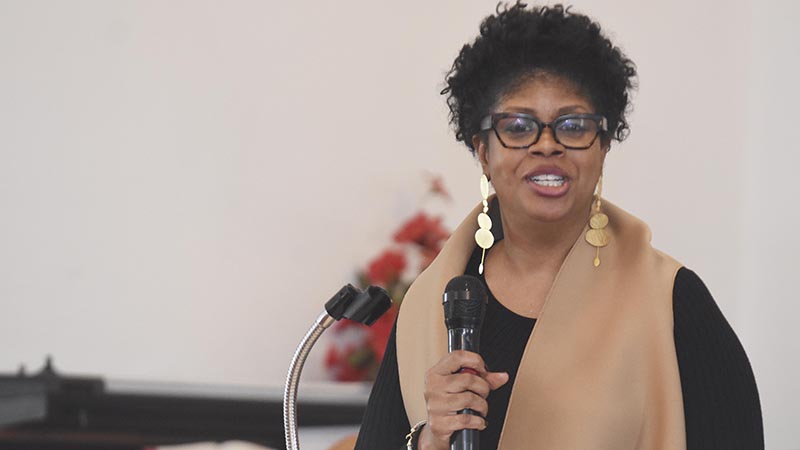 It was a true community gathering Saturday at Union Springs Methodist Church as many came together to remember the life of Henry “Peg” Gilbert, who was killed in 1947 in the Harris County Jail.

Gilbert’s family members, law enforcement officers from Harris County and Troup County and leaders from The Civil Rights and Restorative Justice Project at Northeastern University School of Law spoke as part of the ceremony.

Henry “Peg” Gilbert was an African American man who owned over 100 acres of land in Troup County, and his arrest actually was a result of a confrontation between two other men. Gus Davidson, an African American male, hit a calf while driving that belonged to Olin Sands, a white Troup County farmer. A story in the LaGrange Daily News, headlined “Troup Farmer, Sands, Killed by Gun Shots” says that Sands confronted Davidson, who allegedly fired three shots and killed Sands.

Gilbert was arrested and charged with being an accessory in connection with Sands’ murder. According to newspaper stories, the Harris County Sheriff at the time, M. E. Hadley, said that Gilbert transported Davidson in his automobile after Sands’ death.

On May 23, 1947, Gilbert was shot and killed in the Harris County Jail. According to newspaper records, County Chief of Police W.H. Buchanan said that Gilbert told him that he was ready to make a confession and asked him to come to the jail. The newspaper said that Buchanan went to see Gilbert and asked if he was ready to confess.  Gilbert reportedly said “Yes, I’m ready to end it all.”

Buchanan said that Gilbert struck him with a chair, knocking him down and then jumped on top of him. Buchanan said he kicked Gilbert off and shot him, according to the 1947 story in the LDN.

The draft of a report by Tara Dunn and Ariel Goeun Kong of Northeastern University School of Law tells a different story. The report notes a report by Georgia State Patrol officer, Sgt. T.E. McClung, who described Gilbert’s body as mangled, including a beaten face, a broken left leg, a mangled body with multiple bullet wounds. Dunn oversaw Saturday’s ceremony.

“Henry Gilbert did not die because he raised a chair before Mr. Buchanan,” said Dr. Margaret Burnham, director of the Civil Rights and Restorative Justice Project at Northeastern University. “Henry Gilbert died at the hands of a mob in police custody. He was shot five times and his body reduced to a sack full of bones. Henry ‘Mae’ Gilbert was not charged in a criminal case because she harbored anyone. She was falsely charged to terrorize her and her family.”

Mae Henry was arrested under the charges or harboring a criminal, but her charges were dismissed. After Henry Gilbert’s death, the family was forced to sell the farm. Mae Henry passed away in 1988.

One of the grandchildren of Henry and Mae Henry Gilbert, Shelia Moss Brown, spoke on behalf of the family during the ceremony.  She read a letter from her 90-year-old mother, Recie Gilbert Moss, about Henry. Recie was unable to make the ceremony.

“If the death of my father has motivated others to become involved in the struggle for better society, a society where there is kindness and justice for all, then we know his living was not in vain,” Recie wrote.

Karen Branan, the granddaughter of Sheriff M.E. Hadley, has researched the Gilbert’s story extensively and has spoken about it many times. She read a letter Saturday that she wrote to Recie last year.

“I know I am not responsible, but I do want to be accountable and live my life in a very different way,” Branan wrote in the letter. “That does not begin to express the grief I have felt from afar for your father and mother, you and your sisters, and now your children, nieces, nephews and grandchildren. No family deserves to have a beloved husband, father and grandfather murdered, especially by public officials, sworn to protect them.”

“I am honored to take part in this ceremony and acknowledgement. The acknowledgement that in 1947 the criminal justice system of our country, our state, our county and more specifically, a profession in which I represent, failed. We failed to serve and protect a citizen, Mr. Henry ‘Peg’ Gilbert’ during their most defenseless and exposed time,” Jolley said. “A time in which we as a profession should’ve been there to protect and support. No one in their right frame of mind and especially a law enforcement officer of today could believe that Mr. Gilbert received justice the last few weeks of 1947 because he did not.”

A candle lighting by the Gilbert family was part of the ceremony and a historic marker will be installed at a store at Jones Crossroads, not far from where the original dispute took place.  Gilbert had served as a deacon at Union Springs Baptist Church, which was nearby where the Methodist church is located.  The marker was made possible through The Civil Rights and Restorative Justice Project.

“Our system of law works well, some of the time and I say that because in Mr. Gilbert’s case, it didn’t work at all,” said Superior Court Judge Ron Mullins, who represents the Chattahoochee Judicial Circuit. “By all reports, it was a total failure. The system cost Mr. Gilbert his life and did irreparable harm to his family and his community.”

Burnham said despite Saturday’s ceremony, the work on the Gilbert project is not complete because there are still many unknowns. She challenged anyone with answers to come forward.

“There are things that people in the community know that have not yet come to light about Henry Gilbert’s death,” Burnham said. “The work of One Harris must go on. Someone knows who exactly was responsible for the terror he suffered. Someone knows that. And that truth has yet to emerge and until it does, the book on this case is not closed.”